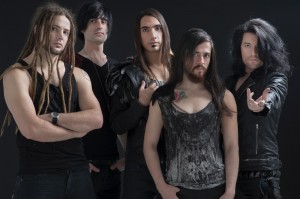 With a brand new album under their belts, and already some superb opening slots notched up, Mark Freebase caught up with the driving melodic metal rockers…

So how would you best describe NEONFLY’s sound, and what inspires you to write and play this music?
A souped up brew of AOR, Prog and Metal that aims for the heart and messes with your head! Power AOR it was recently described as … I sorta like that.  We are inspired by a huge variety of bands and genres but what counts the most for us is ‘the song’, displays of self indulgence and pointless technical virtuosity leave us cold, its all about the tune at the end of the day.

How did you hook up with producer Dennis Ward, I mean he has some pretty respected names (Angra, Michael Kiske, Krokus, Pink Cream 69, Unisonic) amongst his credits?
Dear Dennis… we met backstage at The Masters of Rock Festival in The Czech Republic…We’d just done the main stage and had fire in our bellies.  Loving his work as we do, particularly with Angra, we struck up a conversation and two years later the result is our lovely new album ‘Strangers In Paradise’, which Dennis did an exquisite job of producing.

So how much of a driving force was he to push your abilities?
He was both a harsh taskmaster and a gentle mistress rolled into one.  As all good producers are.  He knows how far he can push you and when to pull back and take the pressure off.  He’s seen it all before so you leave your ego at the door and listen to his guidance, as we did, he knows instinctively how to capture a take and when. I’d work with him again in a heartbeat. 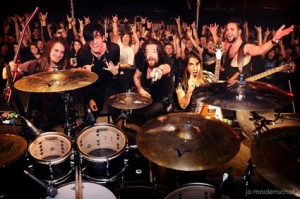 NEONFLY has already had some really good support slots come your way, how has that affected the band and it’s attitudes?
Well its made us realise that every night you have to give 200% because you are playing to fans of another band as support and you need to persuade them of your worth – we consequently never play half assed shows.  It’s a great challenge to win an audience over and one we meet happily head on.  We have been really fortunate in touring with some fantastic musicians all of whom have been hugely forthcoming with help and advice whenever we needed it, we’ve learnt from some of the best.

So what’s been the highlight so far?
There’s been tons! Opening for Alice Cooper was something I will never forget, the anticipation and energy off the audience was electric.  Playing Download and Bloodstock.  Supporting the magnificent Magnum, one of the greatest melodic rock bands that Britain has ever produced, was a great honour.  Opening for Dragonforce, another immensely cool outfit was a blast. The list goes on and on really…

The artwork for ‘Strangers In Paradise’ is quite intricate, does it reflect the bands sound, or what was the decision for using the said picture?
We’re glad you like it!  The artwork is a specially commissioned piece by American artist Jorge ‘Qetza’ Garza.   Culturally and musically we have a Hispanic influence in what we do  – which is particularly noticeable on ‘Strangers In Paradise’ and we wanted to celebrate that in the cover art.  Also lyrically some of our key songs have a Central/South American point of inspiration; again we felt that should be reflected in the cover.  The cover depicts the feathered serpent, the Aztec God Quetzalcoatl, who in Mesoamerican culture has been associated with political structures, warfare and fertility, all of which tie in lyrically with what we’re trying to say in one way or another in the album. Keen eyes will spot symbols in the design that tie in with our lyrics…..

How can you compare or distance this new album for debut ‘Outshine The Sun’ then?
I always say ‘Outshine’ was our shiny machine tooled LA album and ‘Strangers’ is our darker weightier European album.  We’re mightily proud of ‘Outshine’ and are adamant that it stands up really well, but we feel ‘Strangers’ is sonically, and in terms of song writing, in a different ballpark altogether. ‘Outshine’ was the tasty and beguiling hors d’oeuvre…’Strangers ‘ is the Bacchanalian main course!

What can we expect from Neonfly in 2015?
Tours, Tours and more Tours!!!  Live is where we thrive we have incorporated a ton of new songs into our set so we are excited to thrash out the new material in front of audiences as much as possible! Also we release the first video from the album in January (the single ‘Better Angels’) with more to come later in the year.  Some cool Festival appearances are also being lined up. We’ll see YOU on the road!