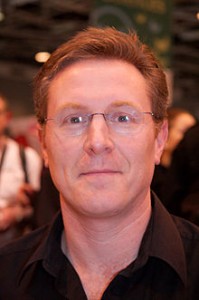 It was the best holiday I ever had. We spent a week in the south of France at a house in a hilltop town. The house belonged to a friend’s parents. The bunch of us were in our early twenties, we’d just finished university, we were young and reckless and thought we were the best things on earth. It was seven days of drinking, swimming in a local lake, listening to music (The Waterboys, Terence Trent D’Arby, Robbie Robertson), relentless flirtation, and helpless, gut-aching laughter.

Then we had to go home.

We drove all day across France and hopped on a ferry back to England. The sun was setting in an apocalyptic, sulphurous haze over the Channel as the boat unmoored and moved off.

One of the books I’d brought with me to read on the holiday was William Gibson’s Neuromancer. Another was Bruce Chatwin’s The Songlines. Both, together, had created a weird fusion in my head, combining a sense of the possibilities of science fiction and an appreciation of the magic in the mundane.

On board the ferry, we idled the time exploring the bar, the shops, the entertainment area, the accommodation. It was a world in microcosm, I thought. Meanwhile, outside, the sunset turned to empty night.

I had, for the previous few months, been toying with the notion of becoming a writer. Before then my dream had been a career in the music industry, a life as a multimillionaire rock megastar. This had come crashing down when the guitarist in our band, my co-songwriter, had announced he was quitting. Nothing I’d been able to say had induced him to reconsider. We’d been musical collaborators since we were thirteen. Without him, the Lennon to my McCartney, there’d seemed no point in carrying on.

Besides, my tutor at university had made some encouraging noises about my prose and my imagination. I now had a belly full of Gibson and Chatwin, new arrivals sitting atop a mound of well-digested Bradbury, King, Wyndham and Conan Doyle. I was becoming increasingly confident that I could make a stab at writing a novel. That I wanted to.

All I needed was an idea.

Then it hit me, a bolt from nowhere. This ferry, this ship – what if it was enormous? What if it was the size of a city, and it was teeming with passengers, and nobody knew where it was going?

Almost in an instant, I had the bones of the book which became my debut novel, The Hope.

Why did that ferry trip ruin my life?

Because from that point on there was no going back. I was committed. I had embarked on a ferry trip of my own, setting out from the port of safety that had been my life up until then. I came from a secure family background, I had managed well at school, I had gained an English Literature degree. Things had been smooth sailing.

And now I was heading into uncharted waters, knowing that writing was an unreliable profession, the world of publishing full of hidden reefs and swirling maelstroms and icebergs and other forms of potential disaster. What if it went wrong? What if it became Titanic rather than titanic? What if I ended up all at sea?

It hasn’t gone wrong, so far. Fingers crossed, it never will.

All the same, somewhere between France and England, between the paradise of that holiday and a future of uncertainty, I had changed. I had been changed. I had waved farewell to the sanctuary of my youth and set my course into true adulthood.