Warning: preg_match() expects parameter 2 to be string, object given in /var/www/vip4/sites/vip6102689/httpd/htdocs/wp-includes/formatting.php on line 4866
 Doctor Who: Dark Eyes 3 - Mass Movement
x
Spread the love 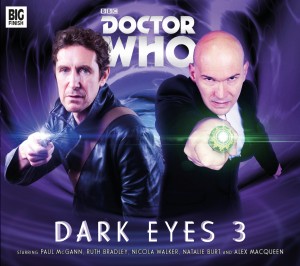 Doctor Who: Dark Eyes 3 – Starring Paul McGann, Ruth Bradley, Nicola Walker, Natalie Burt, Alex Macqueen, Sean Carlsen, David Sibley, Geoffrey Breton, Georgie Fuller, Sacha Dhawan, Sarah Mowat, Laura Riseborough, John Banks, Georgia Moffett, Beth Chalmers & Jonathan Forbes & Written by Matt Fitton – 5xCD / Download (Big Finish Productions)
In the annals of rock-n-roll there’s a long established, tried, trusted and true rule that the third album, the difficult third album as it’s more commonly referred to, is the one that either makes or breaks you. It’s been the downfall, and conversely the making, of many a band, and it’s the position that ‘Dark Eyes’ finds itself in with Matt Fitton taking the reigns as the sole writer of series three. So, the questions are… Without the ever watchful eye of Nicholas Briggs at the helm, does the “difficult” third series of ‘Dark Eyes’ sink or swim? Has it, under the guidance of Matt Fitton soared majestically or this time has he flown too close to the sun? Are you sure that you want to know the answer? Really? You are? On your own head be it…Nah, I’m just playing with you, of course it hasn’t suffered, Fitton was, and is, more than up to task, and from the dust scored, distant colony opening to the earth bound finale, ‘Dark Eyes 3’ doesn’t miss a beat, hitting the ground running from the off and not easing up until the final bar of the end music fades away. It is, I’m happy to say, business as usual for the Doctor and ‘Dark Eyes’.

This time though, there are no Daleks, just the Doctor and The Master pursuing each other across time and space with the former trying to prevent the latter from disrupting and perverting the course of the half century war between The Eminence and Humanity for his own devilish purposes and schemes. To this end, The Master has kidnapped Molly O’Sullivan (the Dark Eyes of the title) in an effort to subvert the Eminence’s means of control through mass medical experimentation and trial and error, and with a little help from the Celestial Intervention Agency and the master of behind the scenes chronological cloak and dagger, Narvin, The Doctor sets out at full tilt to save Molly and the Universe from the clutches of his oldest adversary. As colonies and entire races fall by the wayside in the wake of The Master and The Eminence, The Doctor becomes increasingly frantic in his efforts to stop them and rescue his friend, and with Liv Chenka by his side again, heads to a final, fateful confrontation on a newly repopulated Earth.

As with both of the previous series, the pacing is mind bogglingly quick, the plot involving, interesting, intriguing and absorbing and the characterisation is absolutely fantastic. Alexander Macqueen’s Master is the perfect foil for McGann’s Doctor, each bringing out the best in the other, which in turn allows the rest of the cast to shine, particularly Nicola Walker as Chenka (who is fast becoming a firm favourite around these parts, and could be the best companion since Evelyn Smythe) and the ever dependable Sean Carlsen as Narvin. Matt Fitton has surpassed himself and written a tour de force drama that’s reminiscent of the Third Doctor’s encounters with The Master but at the same time is unmistakably an Eighth Doctor tale in both feel and tone. And you know what that means don’t you? That’s right. Dark Eyes 3 is, without a shadow of a doubt, brilliant… Tim Mass Movement