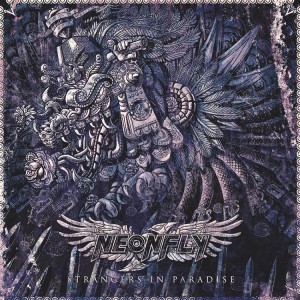 NEONFLY – Strangers In Paradise CD (Inner Wound Records)
You may have seen this band opening for the likes of Alice Cooper, Magnum, H.E.A.T., Sonata Arctica, Dragonforce, Freedom’s Call, or even gracing the stage at one of Europe’s festivals… and quite rightly they deserve the attention as the young band’s driving melodic metal is of a high quality fit for release upon the obstinate world of heavy metal. Vivacious vocals together with energetic bursts of intricate pronunciation display Willy Norton’s skills as a powerfully affable frontman, a good choice to lead the sharp and intricate riffs, rhythms and hooks. It’s great to hear NEONFLY lean towards the heavier end of the Euro/melodic/powermetal/call it what you will spectrum. The overall keyboard and orchestral arrangements do not drown out what is essentially the point of interest in this style of music, they are used to create depth and even flow along with a captivating drumming throughout the entire up-tempo surge of the album. With only one song coming in past the five minute mark it’s pleasing to hear things are not drawn out just for the sake of it, the ten songs aired here are well composed slabs of credence. NEONFLY’s seasoned musicianship is a credit to a band regardless of age, and ‘Strangers In Paradise’ should be recognised for it’s precision. Mark Freebase