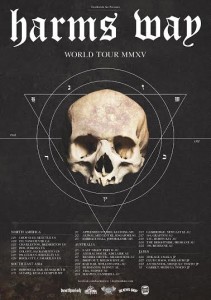 The band recently wrapped recording their Deathwish debut full-length with Andy Nelson at Bricktop Recording Studios in Chicago. Scheduled for an early 2015 release via Deathwish Inc., this new LP is the follow-up to Harm’s Way‘s monumental back catalog: Blinded EP (Deathwish, 2013), Isolation LP (Closed Casket, 2011), No Gods No Masters EP (Closed Casket, 2010), and their debut Reality Approaches LP (OCR, 2009). This album will showcase Harm’s Way at their finest: 10 tracks that are more progressive, more expansive, and more ferocious than ever before.

Since the band’s formation, they’e toured the globe numerous times over and have hit most heavy music festivals in the U.S. and abroad (This Is Hardcore, New England Metal & Hardcore Fest, Fluff Fest, Vlamrock, and more). And by doing so, they’ve garnered a reputation for some of the most powerful and harrowing live shows in aggressive music today. Harm’s Way have seen critical acclaim as well, and each album they release has been heavier and more adventurous than its predecessor. Now, Harm’s Way have absolutely honed their sound – a mix of metal, hardcore, and industrial – and this new full-length will continue them on this path they’ve forged for themselves; fueled by vitriol, and stronger than all.