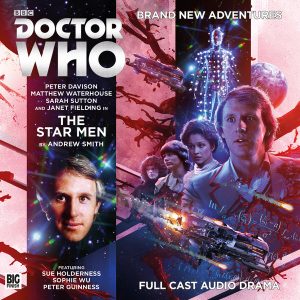 History, as Churchill once famously remarked, is written by the victors; but when the established events around which it is fashioned are disrupted at a crucial point in humanity’s journey to the stars, the Doctor and his companions find themselves desperately scrambling to discover who, or what is responsible before time, and the Universe, are irreparably damaged by the rapidly changing events. Like most of the crises that the Doctor becomes ensnared by, it all started innocently enough, with him trying to teach Adric the finer points of celestial navigation by visiting a planet, Gallius Ultima, whose unique location would make the process infinitely easier. Unfortunately, thanks to a miscalculation, the Tardis arrives a century later than the Doctor expected, materialising as the first human built ship capable of folding space to cover vast intergalactic distances in instant, returns from its initial mission.  Regarded as one of mankind’s greatest triumphs and the beginning of the age of exploration in the established timeline, the damaged ship’s arrival subverts recorded events and plunges the crew of the Tardis into a furious battle against an impossible foe from an equally improbable place in which the future of the Universe, and all life in it, is at stake.

The Star Men combines the traditional tropes of the base under siege scenario and merciless, alien would be invading hordes with Lovecraftian horror, pulp Science Fiction and the sort of multiverse theory that was popularised during Christopher Bidmead’s tenure on Doctor Who. Which is strangely fitting, given the Tardis crew in this story, and gives the The Star Men a sense of period and place, occurring as it does somewhere between The Visitation and Earthshock. Even though it proudly wears its influences on its sleeve – most notably Invasion of the Body Snatchers, John Campbell’s Who Goes There? and Event Horizon – The Star Men doesn’t draw too heavily from any of them and is a richly detailed, frantic drama that’s equal parts space opera and claustrophobic terror. The hero of the hour though is Adric, and while his character wasn’t given the attention that he deserved when he became one of the Doctor’s companions, in The Star Men he’s brought front and centre in an endearing, and ultimately rather upsetting, subplot in which he’s bluntly and brutally exposed to the reality of teenage heartbreak in its rawest form.  Andrew Smith’s adrenalized and emotionally charged adventure barely pauses from breath for beginning to end, yet at the same time manages to build a likeable and immediate set of supporting characters while adding to the ongoing mythology of the main players, which the cast to do what they do best and bring The Star Men to frightening, glorious life. In space, everyone can hear you scream… Tim Cundle