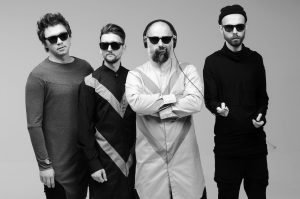 Ukrainian indie quartet Vagabond Specter have streamed their new single “Half A Billion Miles” exclusively on Pure Grain Audio! Vocalist Pablo Specter had this to say on the song’s theme:

“In 2014 I read this news about spacecraft Rosetta and its module Philae landing on Comet “67P” after 10 years of travel from planet Earth. According to the news, such an “extraordinary feat” was made for the first time in history. This gave me an idea for lyrics about the spacecraft in love, traveling such an enormous distance to meet its “interstellar love”. In the first version of the song, we used fragments from the TV coverage about the mission, but then decided to remove them.

The other news said that this comet actually sings, by emitting beautiful rumbling sounds. We found the record of this “comet song” and you can hear it in our track. Musically, we wanted to add to nostalgic references from the late 70s electronica & disco scenes. Yuriy (Smalius – Guitars/Keyboards/Producer) had a lot of fun utilising Moog, Korg, Nord and half a billion VST instruments into the mix.”

The single can be heard here

Based in Kiev, Ukraine and initially a studio project, Vagabond Specter is the joint brainchild of vocalist Pablo Specter & guitarist, keyboard player and producer Yuriy Smalius, who met in Kiev in 2014. At the time, Pablo had skeletons of songs that would later become their debut album, “MIRRORS”, until Yuriy stepped in and helped him flesh out his ideas. After a year of hard work, the duo recruited bassist Egor Gavrilenko & drummer Alex Okremov to help bring their musical vision to life in the live arena.

Since then the band have busied themselves over the last year, racking up a slew of dates throughout their native Ukraine. Including their “Secret tour” – a 25 date run through different Ukrainian towns, slots on Atlas Festival and Faine Misto Festival, and scoring support slots with Bloom Twins & Pianoboy. The band will be rounding out the year supporting legendary US altpop outfit Garbage in Kiev on November 13th.

Drawing inspiration from the likes of The Black Keys, Muse, The Killers, The National and Death Cab For Cutie among others, “Mirrors” mixes Pablo’s easy vocals atop a warm bed of fuzzy electronics, steady rhythms and effortlessly shifting guitar work. Tracks like lead singles “Half A Billion Miles” and “She’s A Bird” mix hints of Frusciante-esque guitar layering with beautiful melodies, held together by driving percussive work.

The new album is set for a worldwide release on 25th January 2017.