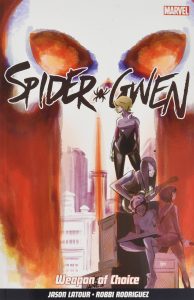 A wise man once told his nephew “With great power comes great responsibility” and ever since those words were first uttered, they have become one of the the core mantra’s that govern the Marvel Universe. It’s definitely a rule that Gwen Stacy, the parallel Earth Spider-Woman, has taken to heart; and even de-powered and reliant on technology to trigger her now latent abilities, it’s a caveat she does her utmost to live by. But like most of the Spider folks littered throughout time and space, her personal life is, at best, a mess, and at worst, chaotic and try as she might, sometimes she finds out the hard way that it’s tough to be one of the good guys when everything around you is going to hell. And in Weapon of Choice, things get even harder for her when the Frank Castle of her world is determined to prove that Gwen Stacy is Spider-Woman regardless of the personal cost to himself and anyone who gets in his way of his one man mission. Like all vendetta’s, Castle’s pursuit of his quarry can, and does, only end one way, in a showdown between hunter and hunted that has unexpected, and devastating, consequences for both Gwen and Frank.

Weapon of Choice is a fast moving, action packed and constantly evolving came of cat and mouse,  that centres around, and on, Gwen trying to come to terms with who she is, everything she’s seen and done and, ultimately, her place in the world. It’s the perpetual teenage dilemma that everyone faces at some point in their life, only in Gwen’s case, the burning, over-riding question of “Who am I?”, is made exponentially more difficult by her dual identity as the drummer of The Mary Janes who just wants to hang out with her friends, and her role as the super-powered, wall crawling defender of her city: Spider-Woman. Oh, and there’s also a Scooby-Doo meets The Freak Brothers style Halloween themed one shot about the Mary Jane’s encounter with Mysterio  included as a bonus feature (or if you prefer, the B-film to the feature presentation) that’s actually worth the price of admission alone. Latour and Rodriguez have nailed it with Spider-Gwen, as the formers snappy story-telling, characterisation and dialogue effortlessly blends with the latter’s cool, flowing Romita Jnr favoured illustrations to create a book that you just want to read, read and read some more. And when you’re not pouring over the story, you just want to stare at Rodriguez’s incredible art for hours on end.  It’s Spidey time…  Tim Cundle