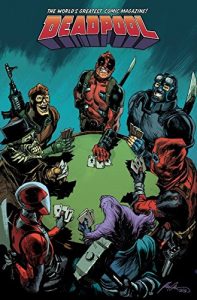 The thing with bigtime world-shaking and re-shaping crossover events is that no-one escapes scot-free. Whether they’re a major or a minor player in the comic book realm, when the tsunami hits, everyone gets wet; and Civil War II struck with more than enough force to shake every hero’s foundations.  With his star in the ascendancy and having reached the dizzying heights of A-List superhero fame, Deadpool is caught in the crosshairs of the vengeful hand of fate that follows in Civil War II’s wake. The bullet that Karma fires at Wade doesn’t inflict any physical (well, no more than usual anyway) damage, but instead tears through his life like a hurricane and leaves him spiritually busted and emotionally broken.  Like every husband in history, in Civil War II he’s the last one to know that his wife is cheating on him and when he does find out – although the build up to Wade’s discovering her infidelity is darkly chucklelicious – their relationship ends in copious amounts of violence, splattered brains and a cavalcade of one liners served up with an appetiser of wince inducing pain. While that would be enough to sink most chapps, Wade isn’t like most men, and needing an extra dusting down, because one kicking from Lady Luck just isn’t enough, he falls victim to the rule of three as his relationship with his daughter begins accelerating toward nowhere and his time as the popular face, and head, of the Mercs for Money comes to an excruciating, and in usual Deadpool fashion, hilariously protracted end.  Yeah, it never rains in Wade’s world, it always pours, but at least he made it through Civil War II without dying. Well, not on the outside anyway, but with some of the Hell he’s put through, there are moments when he almost certainly wishes it would all come to a crushing end.

Gerry Duggan, probably (and rightly) figuring that whatever happens to the other heroes in Civil War II, Wade, being a natural master of disaster, has to double up and have it far worse, ups the ante for Deadpool and cuts him loose from all of the good things in his life. Tragedy breeds comedy, and the more tragic something is, the blacker the humour in Civil War II becomes; which is just as well, as Wade is at his absolute best when the funny stuff is, as David St. Hubbins once so eloquently put it, “none more black”. With his trio of artistic genii functioning at their absolute best, Duggan follows suit and delivers a story that’s rammed to the rafters with laughs, bloodshed and murderousness in equal measure and continues Deadpool’s gradual transition from giggle-a-minute crazier than a whole bag full of crazy gun happy lunatic into Marvel’s very own Pagliacci, the forlorn, anguished,  unhinged clown.  Ladies and gentlemen, boys and girls, let’s hear it for Deadpool. Bravo Wade, bravo… Tim Cundle