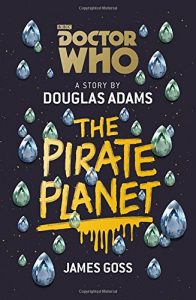 The Doctor and Romana, on a hunt for all six pieces of the Key to Time, learn that the second part of said Key lies somewhere on a planet called Calufrax. They set the TARDIS coordinates but materialise instead on a planet called Zanak, which has been hollowed out and fitted with hyperspace engines, allowing its insane, half-robot Captain to materialise around smaller planets and plunder their resources. Cue much shouting from said Captain (“MR FIBULI!”), and one of Tom Baker’s finest performances to date. I’ll never forget his voice cracking with despair as he tries to understand why somebody would do something as greedy and downright terrifying to other innocent planets. “But what’s it for?” he screams at the Captain, all spittle and badly-camouflaged dog bites.

But enough of shouting and spitting. I’m here to review a novel, and I’m only too aware that writing can be a tough gig. You need to use the right words in the right order to tell a decent story, and on top of that you need to keep your audience informed and, vitally when it comes to fiction, entertained. I find it hard, and all I do is write reviews and the occasional shopping list.

So imagine being James Goss. You’ve been asked to write a novelisation of one of Doctor Who’s most loved television adventures, and one featuring Tom Baker at his flamboyant, mercurial best to boot. Not only that, but the original story was scripted by none other than Douglas Adams. How in the name of Rassilon do you do any of this justice?  How do you make it your own?  How do you not upset fans of classic Who, fans of the fourth Doctor and fans of Adams himself?  It’s a bloody tough ask, and I’d be terrified if it was something I’d been asked to do. “Bex- stick this target to your chest, power up the word processor and off you go. Toodles!”

The Pirate Planet is, for all of the reasons mentioned above, one of my favourite Doctor Who stories in the whole wide world EVER. So I have to admit to being a more than a little nervous when I cracked open my shiny new copy of the novelisation– it can be hard to write a review of something that you hold dear if it is being handled by someone new, especially if it all goes terribly wrong. Having said that, James Goss is currently one of my favourite authors, so if anyone could do it….

…and boy, does he. Every single word of this beautifully bound tome is damn near perfect. It retells the story so well I found myself replaying every single scene in my head, but there’s so much more to enjoy. We learn more about the relationship between the Doctor and his new companion, and discover that Romanadvoratrelundar is actually rather intimidated by the Doctor, who in turn is so unsettled by her abilities, he fears he will become little more than her companion.   Slowly, their relationship becomes less tense and more convivial, and by the adventure’s end they have warmed to each other enough to enjoy some mutual leg-pulling and shared affection. Importantly, while there are echoes of Adams from start to finish, James Goss has been brave enough to avoid ghost writing.  It’s his voice that tells the story, not Douglas Adams, and as a result every word sparkles.

I’ve not had so much fun since doing the Zip Wire at Bethesda last summer, so I finished reading this book, put it on my shelf, and then picked it up the very next day to start reading it again. Yes fellow Whovians. It really IS that good. Bex Ferriday