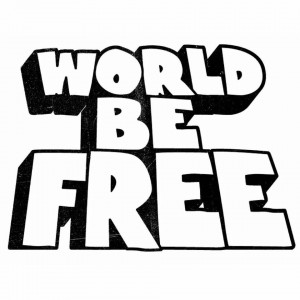 Fans of classic hardcore rejoice!  World Be Free are here to deliver old school hardcore along the lines of Uniform Choice and Youth of Today. Featuring members of Terror, Envy, Strife and Gorilla Biscuits, their debut album “The Anti-Circle”, is out now on Revelation Records. MM caught up with the band to get the lowdown … 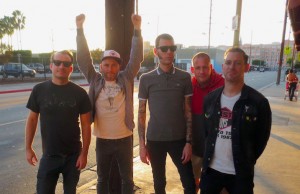 MM: How did you guys get together, who had the idea of putting the band together?
Andrew: We started World Be Free almost a year and a half ago. Scott had wanted to start a more melodic influenced hardcore band for a while.  A band with the sensibilities and spirit of some of our favorite hardcore bands we grew up on.  Scott talked about writing a few songs with his friend Joe who had played with him in the past in Despair. I was into the idea from the get go.  I went home and started working on songs almost immediately. We knew we would need to find the perfect drummer, and when it comes to hardcore there is no one better than Sammy Siegler. We gave Sammy a call, and the rest is history. We started writing and rehearsing as much as we could and six months later we had 16 songs, a name, and we were ready to record an LP. Arthur came into the fold right before we began tracking. He flew to Los Angeles and we rehearsed, and the next day we were off to Hurley Studios to begin tracking the record!

MM: You named the band after former NBA player Lloyd Bernard Free, who changed his name to World B Free. What was the thinking behind naming the band after him?
Andrew: Sammy is a huge basketball fan. He brought the name to us one day at practice, and we all really liked it. On its own, World Be Free is a really cool name for a hardcore band, but the double meaning makes it a bit different, and I liked that.

MM: When you first hit the practice room together did you jam any covers to get the juices flowing?
Andrew: No. We got together and just started working on songs. All of us had a few songs written before we started rehearsing, and we didn’t want to waste any time playing other people’s music. Everyone in the band is busy, and we knew that we had to maximize our time when we got together.

MM: I’ve heard the term “supergroup” a lot when referencing “World Be Free”. Were you aware of the interest in you when you were recording and did it add any pressure?
Andrew: We really wanted the music to speak for itself. We released the first track, “World Be Free”, online with Noisey without mentioning anyone in the band or any of our respective bands. I feel this was really important in establishing the fact that we are a new band with our own identity, and also important because World Be Free doesn’t sound like Terror, Judge or Strife… We wanted listeners to hear the band with fresh ears and no expectations. As far as pressure goes, we all just wanted to make the best record that we could, and I really think that we accomplished that. In the end, we are all just friends making music together…

MM: Walter Schreifels (Gorilla Biscuits, Quicksand, Rival Schools) lays down some guest vocals on the track “I’m done”. Did you always have him in mind to put some vocals down, or did he come to mind when the track was written?
Andrew: Scott and I are huge fans of pretty much every band Walter has ever done. We all wanted Walter to be involved with the record in some capacity, and we felt that the ending of “I’m Done” would be a perfect place for a guest vocal spot. We finished tracking all of the vocals, and Walter happened to be in town for a few shows with Dead Heavens. We booked some studio time and he tracked his vocal parts in less than an hour! We were all very excited that we were able to make this happen.

Sammy: I think Scott always had the thought of working with Walter, originally we were looking to him to produce the record but scheduling didn’t allow for that. The spot on “I’m Done” seemed perfect, Walter was in LA and he was able to make the time, the stars aligned for that one and he nailed it. 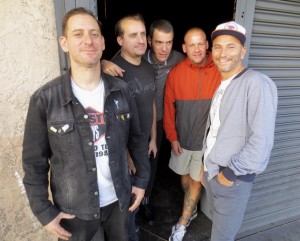 MM: The artwork for the album was designed by Linas Garsys. Did you have a specific idea of what you wanted for the artwork, or did you just let him work his magic?
Andrew: We definitely gave a lot of direction to Linas. We wanted the art to be fun and playful, and somewhat reminiscent of artwork from bands like Gorilla Biscuits and Murphy’s Law. We felt like this record needed to stand out both musically and visually. Linas did a great job, and we are all very happy with how the artwork came out.

MM: The whole theme of this record is positivity. Given that some of you play in some heavier bands that deal with different kinds of issues, how did you change your approach to this record?
Andrew: I think we all wanted to take a different approach with World Be Free. We wanted to create a band with a fun positive vibe, a band that would make kids want to smile and sing along rather than “dance hard or die…”

MM: I imagine there was a lot of label interest in this record Was it a no-brainer to go with Revelation given their history within the hardcore scene?
Andrew: Revelation Records was definitely out first choice. Sammy and Arthur have a long history of working with Revelation, and we felt that “The Anti-Circle” would be a great fit on the label. Aside from the long list of classic albums that Revelation has released in the late 80’s and 90’s, Revelation has recently been putting out some of my favorite current hardcore releases from bands like Down To Nothing, Violent Reaction, Give, and Rival Mob.

Sammy: It was an interesting position to be in. You have a finished hardcore album in 2016 now what do you do? After some debating we all agreed we wanted a partner or a team to rally behind and work with verses a self-release, main thing was getting the word out to the community in the best possible way. Aside from being great people and old friends Rev was the perfect fit, they come with the right aesthetic that we wanted, getting to use the old label logos and the classic Rev R is priceless and they had the balls to do cassettes, the original posters and a few other wacky old school ideas we had.
MM: On the subject of Revelation. What is your favorite Revelation release?
Andrew: With the exception of the Slipknot ep (no, not THAT Slipknot), Revelation 1-22 are all perfect records. If I had to pick my favorite, I would have to say Gorilla Biscuits “Start Today.” That is a perfect record from start to finish, and it still gets me amped to this day!

MM: One of my favorite Revelation releases is “Lower East Side Crew” by Warzone. Next year marks the 20th anniversary of Raybeez passing.  Do you have any good memories/stories about him that you’d like to share?
Andrew: Strife toured with Warzone quite a bit in the mid 90’s. Ray would always stay at my house when Warzone was in town. There was this little taco spot walking distance from my house called “Manny’s Taco De Mexico.” They would give you a plastic souvenir cup when you ordered a large soda. Ray would call me all the time and ask me about Manny’s and he would tell me that he still had the cup! I guess at that time it was really hard to find good Mexican food in New York!

Sammy: Agreed! Ray was like the camp counsellor, he organized softball games at Tomkins Square Park via a letter he posted on the wall at Some Records. He was a visionary with dancer’s on stage, body guards and a smoke machines. I remember one time at the Pyramid Club on a Saturday matinee they were playing and the smoke machine went off while Ray Cappo was on stage about to do a stage dive, it burned his leg… Sickkkkkk. Many awesome memories of him opening the back door to The Ritz and letting us into the “big concerts” for free. 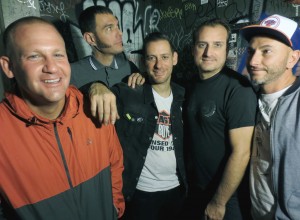 MM: I used to read thanks lists on records and fanzines to find out about new bands. What’s the best way to promote a record these days compared with back in the day?
Andrew: Definitely the internet is important. Twitter, Instagram, and Facebook are all important places to promote a record. I have been seeing a resurgence of Zines lately, and I think that is awesome!

MM: You’re currently touring the U.S with Judge. Any plans to tour Europe?
Andrew: We just finished a West Coast tour with Give, and an East Coast tour with Judge. All of the shows were awesome, and it was great to finally get to play these songs live. We don’t have anything concrete lined up for Europe, but we are definitely working on it.

MM: Most of you have been in the scene for 30 years or more now. What keeps you motivated to make hardcore records in 2016?
Andrew: I think all of us do it because we love it…

Sammy: I love capturing a time in my life and with World Be Free it came together very naturally and thats essentially what we did, captured a moment. As a musician I love playing that fast, I love those beats that I helped create. For better or for worse I still have that fire and love for Hardcore, we played a VFW hall the other night, only one microphone, 400 kids, probably 85 degrees, it was fucking awesome.

MM: Another term I’ve heard mentioned with World Be Free is that you are a “proper” hardcore band. Lots of bands lay claim to being hardcore these days, what does the term mean to you and how do you see the hardcore scene these days?
Andrew: I think the current hardcore scene is great! There are amazing bands all over the world, and their hearts are all in the right place. Some of my favorite bands are Take Offense, Down To Nothing, Praise, Fury, Questions (Brazil), Risk It (Germany), Endzweck (Japan), Cleave (Japan), and many more…

MM: You recorded a great video for “Shake the ghost”. I think it really captured the energy of the record, but what was with the lion suit?
Andrew: Sammy had the idea to include the lion in the video, and I thought that it worked great. We wanted a little something to make our video different, and memorable, and Larry The Lion was a fun little piece. I think it ties back into the characters on the record cover as well.

MM: What’s in the future for World Be Free. Will there be any more records or is this strictly a one-off?
Andrew: We plan to tour as much as we can considering all of our busy schedules… I think we have accomplished a lot in our short time as a band, and I feel that we have only just begun.

“The Anti-Circle” is available from Revelation Records