Warning: preg_match() expects parameter 2 to be string, object given in /var/www/vip4/sites/vip6102689/httpd/htdocs/wp-includes/formatting.php on line 4866
 Pensacon 2016 - Mass Movement
x
Spread the love

It has become a yearly tradition for me, and JeNee, to go to Pensacon in Pensacola, Florida since it first started in 2014.

Along with the main convention being in the Pensacola Bay Center, 2016 also saw events being held in the Crowne Plaza Pensacola Grand, Rex Theatre, and the Saenger Theatre.

Since that first year there have been growing pains, but the biggest one so far, the wait for the dealer’s floor, has now been solved. Last year the wait to actually get onto the floor was, on average, an hour and a half. This year there was hardly any wait at all. 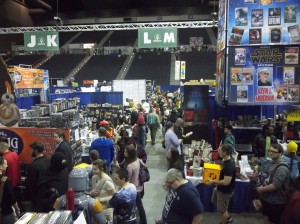 Even though I was only there for the final two days, Saturday and Sunday, there was never enough time to go and do everything scheduled. The first thing I always try to do is visit the previously mentioned dealer’s floor. To see everything that it had to offer took well over two hours. From people selling steam punk gear to classic video, comics, and table top games, every corner of geekdom was accounted for in spades. The coolest part of the floor was the writer’s booth. The authors that were there included Kevin J. Anderson, Dan Wells, Sherrilyn Kenyon, and Mario Acevedo to name but a few. Another hour plus was spent waiting in line to get Kenyon’s autograph for JeNee, during which time she and I both got Acevedo’s autograph 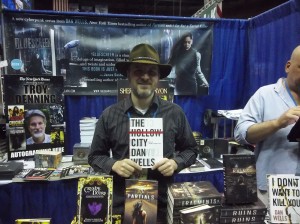 The one drawback to the dealer’s floor was the trader selling the Wondrous Mystery Box of Splendor. Other rather large items were being sold by different vendors such as replica swords, but when a box is as wide as a person, an already limited space is made even smaller by the inevitable large number of folks who purchased these and believe me, a lot of con goers bought them.

Other events on Saturday were a film festival at the Crowne Plaza and panels from the cast of Mallrats, Game of Thrones, and The Rocky Horror Picture Show. Panels by artist Simon Bisley and Neal Adams were also held on Saturday. 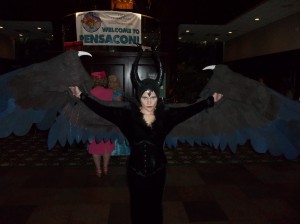 Sunday was spent exploring everything else we’d missed the previous day; mainly the celebrity guests and what was called the Artist Halo, due to the fact that all of the artists were stationed in an oval aisle above the dealer’s floor. I was able to talk to a number of guests; Sid Haig with whom I discussed the possibility of a third movie in the Firefly family saga was very courteous. Sam Witwer was amazingly nice and seemed to enjoy his time among the fans and was happy that JeNee watched both the American and British versions of Being Human. Peter Davison was up for a quick chat, which was nice. Amber Benson, who most fans know as Tara from Buffy the Vampire Slayer, was the one of the last celebrities we talked to briefly and loved that we were there as not so much fans of the aforementioned series, but because of her writing. An interesting note about Benson is that she doesn’t own a television. Other guests included Claudia Christian, Fred Williamson, David Prowse, Michael Dorn, J. August Richards, Vernon Wells, Natalia Tena, Michael Rooker, and Jason Mewes just to name a few 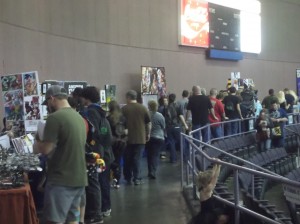 There was still plenty to do including more panels from actors like Vernon Wells, a Harry Potter panel with actors April Edwards, William Melling, and Natalia Tena, and a Doctor Who panel with Peter Davison and Terry Molloy. This is on top of artist roundtables, droid and prop building panels and a lot more including a replica of a time machine, that was, yes, you guessed it, a DeLorean. 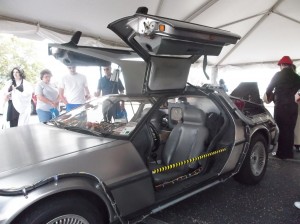 If there was a drawback to this year it would be that, for me, there aren’t enough writers involved in Pensacon. Other than that, Pensacon keeps bringing in classic talent and newer celebrities which creates a really great all around convention that really does include something for everyone. 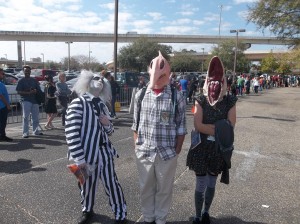 While I’m looking forward to seeing who will be at next year’s convention there are some problems being worked out with the actual scheduling of the event at the time of writing. Here’s hoping everything works out, as this is one convention that just keeps getting better and better…