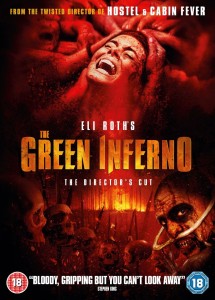 Well, you’ve seen Hostel and Cabin Fever, so you should know what to expect from Eli Roth by now, and this is basically him reimagining Cannibal Holocaust, so don’t be surprised when it turns into torrents of blood and shit and cum about halfway through. Yes, it’s very much a film of two halves, the first so slow as to be boring, the second a thoroughly gruelling riff on the cannibal genre, but thankfully without the animal cruelty that epitomised some of those video nasties. Jonah’s death is particularly shocking, his eyes gouged out and all his limbs amputated whilst still alive, and Roth’s unflinching camera leaves nothing to the imagination, but what should have been a terrifying splatterfest comes across as a strangely soulless endurance test.

It looks fantastic, the jungle an ominous living entity, and the pacing is frantic as it builds to its daft climax, but the characters are paper thin and for the most part dislikeable, the colourful tribe are little more than racial caricatures, and whilst there’s a certain irony to the American students being eaten by the very tribe they’re trying to save, any social commentary is handled with such sledgehammer subtlety by Roth, it’s rendered impotent amidst the carnage.

Admittedly this film provokes an intense reaction in the viewer, which is always welcome in this age of bland by-the-numbers pap, but the feelings it invokes will very much depend upon whether you’re a total gorehound with a high tolerance for cliché. If you’re not it’s just another gratuitous exploitation flick. Ian Glasper