With their latest offering ‘The Skull’ being nearly 3 years old, we decided to was time to find out was happening, and catch up, with Northern UK thrashers Evile.  Mark had a chat with bassist Joel Graham in the run up to their Hammerfest 2016 appearance.

MM: Evile aren’t new comers to Hammerfest, so what are your thoughts on the festival and the line up for 2016?

Joel: Hammerfest is always a good experience for Evile, we’ve always played really stupidly late though, so that means usually by the time we come off stage. we miss the party element of the event. This year however we aren’t… So expect to see us enjoying a few beers when we’re done. The line-up is great. Exodus, Acid Reign and old tour mates Savage Messiah are certainly bands we will be checking out. I also recall having a blast watching Oaf a few years ago, so will definitely be checking them out again.

MM: What are you guys doing to channel your performance and make this a special live show?

Joel: The fact we have been fairly inactive over the last couple of years makes us really hungry to prove that we are still a major force in the UK metal scene. We still work very hard even while ‘off the radar” and it’s extremely important to us personally that we’re a tight unit and deliver a full on, honest interpretation of everything that we do. We are what we release. We’re old school in attitude, what you hear is what we’re playing.

MM: How will you go about choosing the set-list?

Joel: We have a personal commitment to play songs from our latest album ‘Skull’ which we’re immensely proud of, but unfortunately due to Ol leaving the band and the album not getting the push it really deserved on release (due to various reasons) it makes us really fucking stubborn to not dismiss it. We’ve all said there is nothing worse than seeing an established band out on tour playing two songs from the latest album and then relying on ‘older’ material to please the crowd, which when you break it down, basically tells the punters your ‘new’ material is ‘not as good’ as your old stuff. Songs don’t become live staples if you don’t play them. Having said that though, that we will of course be slipping in the odd well-known Evile favourite or two [laughs]. 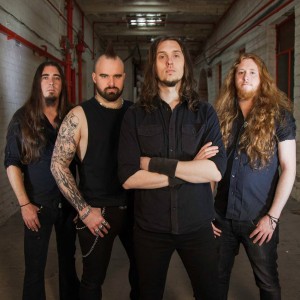 MM: You guys don’t do a massive amount of UK shows, or tour a lot, is there a reason behind that?

Joel: Yes, Evile have historically toured the UK 3 times a year, and honestly that’s too much for a band in the 2000’s. Attention spans and access to immediate entertainment is so abundant that events and gigs stop being moments in time and end up being just another ‘tick on the list’. We want people to want to see us, not just ‘be there’ when we play. We really want to play places we’ve never been; that’s the priority for us now. Plus we work, all of us have day jobs and too much is put out there about bands quitting and splitting up due to lack of making money in the music industry. We enjoy playing music and to stop doing it full stop or making a ‘do or don’t ‘ decision seems to put in to question the whole reason others throw the towel in so easy. You can do both. Unsigned bands and new bands work, gig, don’t sleep travel and work again because the hunger is there. We have four albums out and we still have that hunger.

MM: With Ol out of the band, how has that changed the Evile dynamic?

Joel: It’s changed it… And initial feelings were consumed by fear. We didn’t have a clue how we would move on from his departure, but like any good decision we took our time and found Piers who has proved to be amazing. We are working on stuff together as a band and it works .Really well. But you’ll have to wait, just like we will, for the final result of what we’re currently working on. 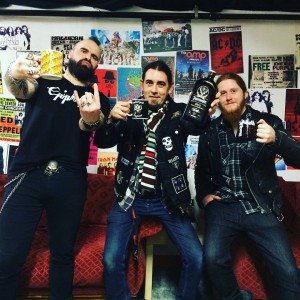 MM: Will you guys be hanging at the bar during the festivities and are you an approachable bunch?

Joel: Absolutely, yes! We are Yorkshire men. No one’s more approachable than a Northerner…

MM: Which Evile song should people check out and why?

Joel: All of them, as it’ll only take about  4 hours of your life!

MM: What’s next on the horizon for Evile…?

Joel: Writing, writing, and some more writing. We play all the time; just not in front of people at the moment! We’re totally going back to basics in an effort to please ourselves first and foremost.