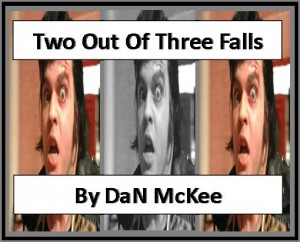 Inspired by Shane McMahon (and a Facebook comment from Tim!) I have decided to make my shocking return to the ring (or to Mass Movement) and resurrect Two Out Of Three Falls as Wrestlemania season approaches.

To be honest, the main reason for this column’s absence for so long was (besides the ludicrous workload of my day-job as a teacher) the fact that I was reviewing wrestling DVDs for MM too. Don’t worry – I still am! But I have taken the decision (completely unilaterally – Tim doesn’t know until he reads it here first: hope it’s OK, Tim?) to stop reviewing DVDs of the WWE’s monthly PPVs. Basically, I found that once I’d written about the event in a Two Out of Three Falls, I had little more to say about it in the review. Conversely, once I’d reviewed the event on DVD, there wasn’t much more to say about it here. So as the DVDs kept coming, my thoughts went into the reviews and the column fell by the wayside.

While I’m still going to review all the cool collections, Best Ofs, documentaries and assorted other products from the good folks at WWE Home Video (look out for Best of NXT soon!), the PPV reviews are done and the column will take their place as a general bi-monthly catch up of all that’s going on inside the WWE squared circle. Besides, unless you’re a total fucking idiot, you’re not buying a PPV on DVD for £15…you’re getting ALL the PPVs for only £9.99 a month on the WWE network. It was starting to make me feel dirty advising you to buy a DVD I knew you could stream far more cheaply, plus get all the other WWE Network extras along with it.

So, as Eric Bischoff’s music used to say: “I’m back!” and like The Bisch, I hope to be “better than ever”.

And where better than with the grandest stage of them all: Wrestlemania. It’s now official – the match no-one wants to see but we’re all going to get is the official main event: Triple H vs Roman Reigns. 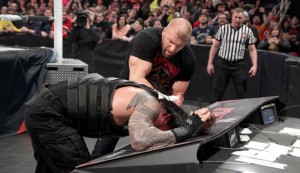 Only, against all odds, I’m suddenly finding myself interested.

Not because of the beat-down The Game gave to Reigns on Monday, breaking his nose and turning red into green (courtesy of Byron Saxton), but because the dull predictability of the Reigns coronation (his third if my count is correct?) feels SO dull and predictable that I feel WWE is doing it on purpose. Just as they spent nearly a year fucking with us over Daniel Bryan only to lead into the most memorable Wrestlemania moment in decades, the rabid fan response for Dean Ambrose over his dreary Shield “brother” Reigns is just begging for a huge and bitter rivalry somewhere down the road. We all know Ambrose deserves it. We all hate Reigns for being given it on a silver platter. And WWE know this, and will use it to make a lot of money out of us at some point down the road.  So I’m happy to watch the monotony play out until the pay-off comes out of nowhere and blows my mind. Like Daniel Bryan actually beating all of Evolution in one night. Like Seth Rollins cashing in last year…

Not that the surprise will necessarily happen at Mania. But it doesn’t need to. Wrestling psychology is all about planting seeds and then harvesting them only when the time is exactly right.

Or when everyone else on the roster is either injured or retired and you have no other choice but to go in a weird direction.

It is a frightening statistic when you realise that everyone who left Wrestlemania 31 with gold (Bryan, Cena, Rollins, Kidd, Cesaro) are all out with injuries this year. But I like when circumstances lead to unplanned and unexplored possibilities. Without Crispin Glover’s sudden departure from Back To The Future II, we would never have had the weird and wacky alternate 1985. Without Hulk Hogan leaving WWE in the early 90s, we would not have had Bret Hart and HBK and the “new generation”. Personally, I’m hugely excited at the return of Shane McMahon as a desperation stand-in for John Cena against The Undertaker, and look forward to where it might go. The “feels real” sibling rivalry between Shane and Stephanie makes him the perfect mouthpiece to combat his heelish sister, and the eventual reconciliation and heel turn could be beautiful. 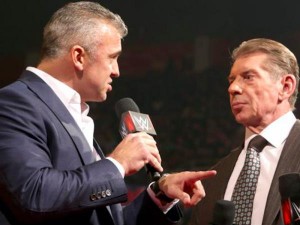 Or we just get to see Undertaker smash him off Hell in a Cell the same way Steve Blackman once smashed him off the Summerslam set or Kurt Angle smashed him through the King of the Ring sign. Shane O’Mac is always fun to watch at his indestructible best, even if it ends up being for one night only. 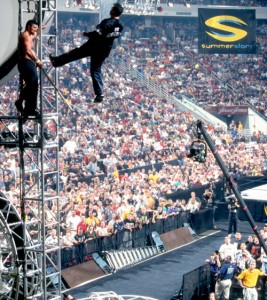 (Which reminds me — remember when the Wyatts were people you cared about, rather than people you groaned about whenever their music hits?  It is a testament to how good Bray Wyatt is that we still want him to be amazing even after over a year of go-nowhere storylines and unintelligible promos.  All I can say is, you are lucky I wasn’t writing the column when the storyline called for the Wyatt’s the “harvest the souls” of Undertaker and Kane — what?!?)

And, we can only assume, AJ Styles. 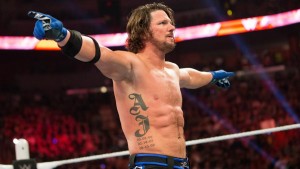 The other big news of 2016 is the addition of AJ Styles to the WWE Roster, and it is amazing to see how well he has been presented and how electric the crowd response has been. The impact of the “phenomenal” NXT revolution continues to make WWE a far better place to be for new talent than it was a few years ago, with a far greater acceptance of those with storied histories elsewhere. With further recent signings leading to Bullet Club speculation, and a roster of hungry NXT talent making a name for themselves at the performance centre, it is an exciting time to be a wrestling fan, and I’m glad I’m back to talk about it.

So get ready MM Universe and don’t be sour.  Clap your hands for your returning columnist and feel the power…