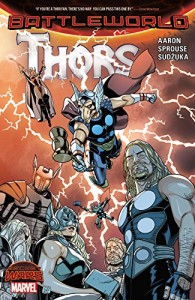 What could be better than Thor? Why, multiple Thors of course! And while that was the direction that the book was heading in before Secret Wars (hey, two is sort of a multiple, right? It’s certainly more than one, and more is good. Sometimes. Occasionally. Now and then. Well, it is as far as Norse gods doubling as superheroes are concerned) when Jane Foster assumed the mantle after the Son of Odin, in the wake of an all too brief “conversation” with Nick Fury, found himself unworthy of wielding Mjolnir. So, the responsibility of, and the power that comes with, being Thor passed to his former girlfriend, whose identity is (or at least it was before everything turned Doomwards) still shrouded in mystery, which meant that, technically, there were multiple Thors, because you know, the whole two being more than one thing. In Thors, there’s more than two. A lot more. As in Battleworld (which is, for those who don’t know or arrived late, another Secret Wars development), the police department is comprised entirely of Thors, and in order to pound the beat and keep the public safe from the scourge of crime, you’ve got to be worthy of holding the hammer. Which I’m guessing means that the average citizen sleeps a lot more soundly at night, knowing that they’re protected by “Gods”.

However, even a world where justice is dispensed by those imbued with the might of Asgard isn’t safe from the attentions of a seemingly obsessive serial killer, and when the fifth victim in a spate of homicides is found, it’s left up to ‘Ultimate’ Thor and his partner, Beta Ray Thor, to solve the case and stop the perpetrator before anyone else gets hurt.  But that’s easier said than done, and with all the victims bearing a striking similarity and a familiarity that ‘Ultimate’ Thor can’t seem to shake, his investigation takes him to places he never wanted to visit; and its final solution transports him through the looking glass and changes everything he’s ever known. Thors is a wildly imaginative and inventive pastiche of the “buddy cop” genre, incorporating and utilising all of its stereotypical characters and plot points in an original and hugely enjoyable story that comes courtesy of Jason Aaron, and thanks to the exceptionally talented and gifted Chris Sprouse looks every bit as good as it reads. But wait, that’s not all. Remember that time when Loki in a bid to seize the throne of Asgard transformed his step-brother into a frog and abandoned him on Midgard, forcing him to become a reluctant participant in a territorial war between rats and frogs waged in Central Park?  You don’t? Don’t worry, because Walt Simonson’s tale of anthropomorphised conflict (which relates to one of the many wonderful characters in Thors, hence its inclusion) is presented in its full Richard Adams meets Bunnies & Burrows (Am I the only who ever played, and remembers that eighties RPG? Anyone? Anyone? It is just me then…), slightly surreal and quirky glory as an added bonus which closes the book in fantastic, and classic, style. Aye, ‘tis a mighty and powerful tome…  Tim Mass Movement