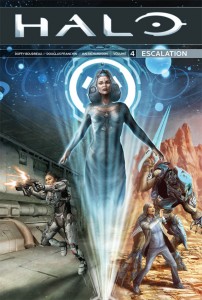 This is the wrap up volume of the Halo: Escalation series that originally lead in to the release of Halo 5, and while it has a great build up, unfortunately it also ends on a slightly disappointing note. Operation: ATHENA is underway to stop Jul ‘Mdama and Dr. Catherine Halsey from discovering what lies within a Forerunner vault known as Absolute Record. As Commander Palmer leads a team to infiltrate ‘Mdama’s ship everything goes sideways as the portal to the vault consumes a portion of her fleet. Now stranded, Palmer and her team must somehow survive the Covenant but out-think Dr. Halsey who wants the Absolute Record and what it leads to: a record of every still existing piece of Forerunner technology as well as a means to start building a facility that’ll grant the ability to activate a fleet of warships meant for exploration.

While I haven’t read any of the previous volumes in the Escalation series, writer Duffy Bourdreau picks up the story after the loss of the Janus Key with Palmer and her crew licking their wounds in the wake of those events. Although this story isn’t a good place to jump into the series, it is easy enough to get into main plot after a couple of pages and once it grabs you, it’ll keep you reading and wanting to know what happens next. That doesn’t mean that it’s all great though. The ethics test between Dr. Halsey and Dr. Glassman, for instance, could have been expanded to illustrate the differing mindsets of the two, instead of fading out after a single question. Then there’s the way the series ends. Even though it wraps everything up nicely, there are questions left unanswered as to what happens to the characters and what impact their actions have had in the Halo universe. The art by Ian Richardson and Douglas Franchin is more than on par for this story and Franchin nails it at the climax with his detailed line work. On the whole, Escalation Volume 4 is a good story with great artwork, but ultimately falls slightly flat as it fails to end things in a truly satisfactory way. Jason Bonton