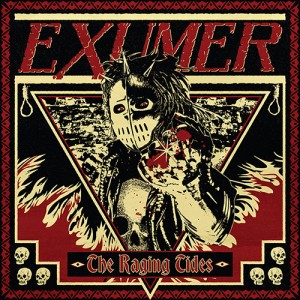 It’s not often Exumer put out a new record, but when they do, well… You know it’s going to thrash! With comeback album ‘Fire & Damnation’ the band made a damn fine return and with ‘The Raging Tides’, Exumer have raised the bar even higher with what is undisputedly their strongest release to date. Put aisde any feelings of nostalgia actually listen to the precision thrash delivered in the opening self-titled track – slender, slick riffs, heavy rhythms, and razor-sharp vocals from Mem prove that the thrash train is still steaming forward. There’s no bullshit here and ‘Brand Of Evil’ increases the pace even more than its predecessor; having said that, it is not all about mindless speed, as song structure and hooks play a massive part in Exumer’s sound. ‘Catatonic’ embraces a (very early) Metallica feel and the likes of ‘Welcome to Hellfire’ gives early Slayer a run for their money. Each song title confirms there’s no mellowing with age, and with much of the lyrical content focusing on human suffering, this all adds extra fuel for the fire in this passionate thrash assault. With next to no breaks in the record’s velocity, it’s only ‘Shadow Walker’ where things take a slightly slower delivery, and of course, in the Pentagram cover ‘Forever My Queen’. Exumer have proven they they can hold their heads high as legends and leaders in the world of thrash. Ferociously good…  Mark Freebase