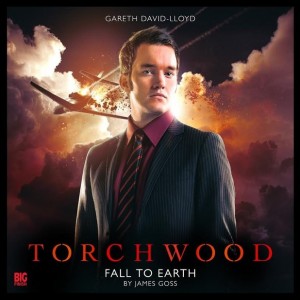 Torchwood: Fall to Earth – Written by James Goss & Performed by Gareth David-Lloyd & Lisa Zahra – CD / Download (Big Finish)
When Ianto Jones died in ‘Children of Earth’, I watched, head in hands, mumbling “No, no, no, no” over and over again, thinking I was in the minority. Turns out I was wrong, as I wasn’t the only one who thought that Ianto was the glue that held ‘Torchwood’ together, that he was the backbone of the team and that without him around, everything would go to hell in handcart faster than you can say ‘Miracle Day’. Okay, so ‘Miracle Day’ wasn’t all that bad, it was actually pretty good truth be told, but it would have been so much better had Ianto been there in the thick of the action, making sure that Torchwood stayed on course. But, that was then and this is now, and now Ianto is back, albeit in a tale set before he died, and all is once again right with the ‘Torchwood’ world.

Opening in usual frantic Torchwood style, ‘Fall to Earth’ finds Mr Jones hurtling toward the planet aboard the first commercial spaceflight; a flight on which he’s apparently the sole survivor, having originally boarded the spacecraft ‘SkyPuncher’ in an attempt to prevent it being sabotaged, and to find out what its billionaire backer Ephraim Salt knows about the ‘Committee’. However, Ianto soon discovers that it’s too little, too late and that those responsible for the conspiracy he set out to uncover are one step ahead of him; which is why he finds himself grievously injured, plunging to Earth in a doomed spaceship and the only person who can help him is an insurance agent on the other end of a particularly fortuitous cold-call. Sometimes you might not get the right tools you need to get the job done properly, but there’s always more than one way to save the day. And in Ianto’s experience, fate always provides a solution, and there’s no such thing as a coincidence. As he and his unlikely saviour race against time to prevent disaster, they slowly realise that nothing has been left to chance and that both of their lives are in imminent danger of being snuffed out by the same rogue spaceship. Once again, Ianto finds himself trapped between a rock and a hard place, but that’s exactly where Torchwood usually find themselves and as the clock ticks down. Ianto and Zeynep (the voice on the other end of Ianto’s phone) step up to the plate and risk everything in order to do their “duty”.

Featuring breath-taking, incredibly moving performances from both Gareth David-Lloyd and Lisa Zahra, James Goss’ ‘Fall to Earth’ is an edge of your seat thriller that sends its audience on almost out of control ride on an emotional rollercoaster. You’ll laugh, you’ll smile, you’ll be on tenterhooks and you’ll almost certainly get a little bit of grit stuck in your eye that could be mistaken for weeping, but really isn’t as it’s just grit. You’ll enjoy every single second of the riveting plot, the furiously paced action, the electric and punchy dialogue and the unerringly accurate characterisation. It is, if you’ll excuse the profanity, bloody brilliant. With knobs on. Croeso nol Ianto… Tim Mass Movement