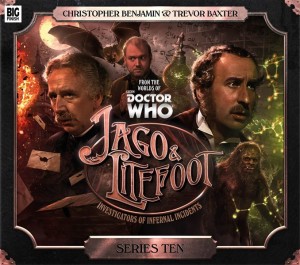 Jago & Litefoot: Series 10 – Starring Christopher Benjamin, Trevor Baxter, Lisa Bowerman, Toby Hadoke, Conrad Asquith, Rosanna Miles, John Rowe, Alex Lowe, Ewan Bailey, Camilla Power, Tracy Wiles & David Warner & Written by Simon Barnard, Paul Morris, James Goss, Jonathan Morris & Justin Richards – 5xCD / Download (Big Finish)
By Jingo, those super supernatural Steam-Punk detectives and Victorian vigilantes par excellence are back for another series of strange and scintillating escapades and hair raising adventures. Since coming to prominence in the Weng-Chiang affair and emerging from The Doctor’s shadow in its wake, George Litefoot and Henry Gordon Jago have saved London, the Empire – and thus by extension the world – from all manner of monstrous machinations, occult oddities, paranormal perils and villainy more times than either of them would care to count. The thing about saving the world though, is it tends to get you noticed, not only by the scoundrels whose schemes have been spoiled but by all sorts of other queer coves and rum sorts. And in Series 10 of ‘Jago & Litefoot’ the eponymous heroes’ past finally catches up with them in spectacular style.

Having been approached, in the concluding moments of the last series, by a writer looking to chronicle their adventures for posterity (and no doubt fiduciary reward), Henry and George are inveigled into letting him accompany them as they set out to investigate murder and foul play in the home of an aristocratic inventor. ‘The Case of the Missing Gasogene’ plunges our intrepid investigators into a maelstrom of eccentric evolutionary experiments and scientific shenanigans that would even shock Edward Hyde. Having had their partnership temporarily fractured by vanity and ego in an attempt to impress their would-be biographer in their previous caper, in ‘The Year of the Bat’, they become entangled in a thirty year old mystery involving kidnap, nefarious nannies and terrifying, immortal beasts. It’s a mystery that serves to strengthen their friendship when they find out that their bond has been in place for far longer than they ever dared imagine, or realised. Even with their partnership fortified, death seeks to tear them apart again, and in The Mourning After’, they battle an undead invasion – separated by time and mortality – that isn’t what it first appears to be; and even with the help of an old friend, nearly brings doom and disaster down upon both of their heads. With all the players on the board, Litefoot and Jago start to play the end game in ‘The Museum of Curiosities’ as they race to unmask, and stop, the devilish mastermind behind all of the their current woes before they become permanent fixtures in his carnival of curious horrors.

This latest series documenting George and Henry’s forays into the unknown feels far more immediate, intimate and personal than their previous stories. With their changing relationship and history taking centre stage whilst the cases circle them this time (instead of it being the other way around), the writing is at least on par with, and in some cases exceeds the impeccable quality that I’ve come to associate with this wonderful series; and the performances are as exemplary as ever. Toby Hadoke’s incredible turn as Carruthers Summerton provides a perfect foil for Messers Benjamin and Baxter and the characters that they’ve well and truly made their own. And that ending, oh that incredible ending and the promises it’s already woven in my imagination are worth the price of admission by itself. But it’s just an addendum, a tease of things to come, one that drags you back to reality after nearly losing yourself in the fantastic main event that is ‘Jago & Litefoot: Series Ten’. Bally good fun… Tim Mass Movement