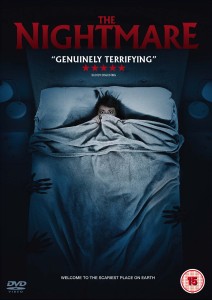 The Nightmare (Altitude)
‘The Nightmare’ is the latest documentary from Rodney Ascher, who previously gave us the bonkers ‘Shining’ documentary, ‘Room 237’, and this time out he takes us into the little explored realm of sleep paralysis. If you’ve not experienced it first-hand (be thankful!), it’s a weird state somewhere between wakefulness, sleep and death, where the sufferer is unable to move whilst being terrorised by sinister shadow beings lurking in the darkness of their bedrooms. Some people experience this only once or twice, some don’t even realise they’ve had an encounter with the disorder and put it down to a stroke – or alien abduction! Others are plagued by it, and learn to live with it, their whole lives. ‘The Nightmare’ meets eight of these people from around the world, who take us inside their  twisted dreams, and make us realise how lucky we are not to be similarly tormented. Ascher spices up the tried ‘n’ tested talking head format with creepy dramatisations of their accounts, some of which work better than others, capturing the helpless horror of being forced to lie motionless as you’re stalked by something unseen; others unfortunately reveal budgetary limitations and look a bit cheap and schlonky. It’s a fascinating film though, and whilst nowhere near being “the scariest documentary ever” and “one of the most frightening films you’ll ever see”, as per the hysterical quotes of the press release, it’s a dark disturbing journey inside the workings of the subconscious that will stay with you after viewing and might even trouble your own sleep for a few hours. Ian Glasper