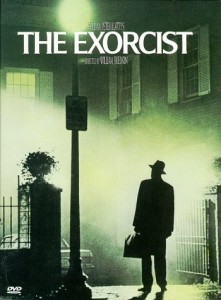 The Exorcist (Warner Bros.)
With All Hallows Eve just around the corner, the folks at Warner Bros asked MM (or rather, me) which title from their horror back-catalogue would I not only choose to watch over all of the others, but also recommend to a friend. Being an “obliging” sort of chap, who admittedly enjoys schadenfreude a little more than he really should, I accepted the challenge. Mainly because it wasn’t really a challenge at all, as there’s one film hidden away in Warner Bros. archives that stands head and shoulders above all others, having decapitated and hacked the limbs from its competitors. That film is ‘The Exorcist’.

During the age of the video “nasty”, the era I grew up in, very few of the films that were either banned or refused a release by the censor lived up to their reputations or the rumour and hype that surrounded them. In fact, the only film that did was, and is, ‘The Exorcist’. Because it was, for all intents and purposes ‘banned’ (although in actuality, it wasn’t granted a release by the BBFC for numerous, erroneous reasons that mainly focussed on the age of Linda Blair’s character), ‘The Exorcist’ like all of its fellow “nasties” was a far more attractive prospect to the teenage me than any of the blood-soaked gore fodder that lined the shelves of all of the local video rental shops. I mean, why waste your time seeing something that anyone and everyone else could see when you could watch something that not only were you not “meant” to watch, but that no-one else could see? Luckily, like many other horror obsessed teenagers, and without going into details (because names are, as a Bond villain so eloquently said ‘for tombstones baby’) I knew someone who knew someone else who could get a copy of film, and before you could say ‘They’re coming to get you Barbra’, fifteen year old me had a genuine, third generation copy of Friedkin’s masterpiece in his hands. Having let it be known that I did, only two of my friends at the time felt “brave”, or curious, enough to sit down and watch the film with me. So, on a cold winters evening in 1987, with the curtains drawn and the lights turned off, I sat down and watched most terrifying film I’ve ever seen, and almost certainly will ever see.

Essentially the story of a teenage girls “possession” and her mother’s attempt to cure her, ‘The Exorcist’ is a character and narrative driven exploration of the nature of good and evil, that also contains more than its fair share of horrific, disturbing and frightening imagery, ideas and jump out of your chair and skin shocks . But it’s so much more than that. It’s a film about the relationships between parents and their children and how they change with age, especially as the offspring enter puberty. It’s a film about faith, its loss, it discovery and the way it shapes life, fate and destiny and the ultimately, death. It’s a film about the eternal conflict that rages in each and every individual, and how our choices and circumstances reflect that. But most of all, for me anyway, it’s a film about the epic battle between two of horror cinema’s greatest figures, the tragic hero, Father Damien Karras and the demon king Pazuzu, a battle forged by belief, fought for the greatest of prizes, a human soul. Unsettling, foreboding, at times deeply unpleasant, harrowing, macabre and unnerving, ‘The Exorcist’ more than any other film made my question my own beliefs about faith and religion and made me realise that, ultimately, Hamlet was right about Heaven and Hell. And you know what? It’s as terrifying today as it ever was. In fact it’s probably more so, because I’m far closer to the grave and the fear of mortality and what (if anything) lies beyond the fleshy confines of Earth adds an extra layer of doubt and horror to its perfectly hideous and horrible equation. Which is why, this Halloween, when the veil that separates the realms of the living and the dead is at its weakest and all manner of ghastly and awful things walk the land, I’ll be watching it again. To remind myself that no matter how appalling, repellent, grim and dreadful the world outside is, it’ll never be anywhere near as scary as the one that William Friedkin brought to life in ‘The Exorcist’ . I dare you to join me… Tim Mass Movement