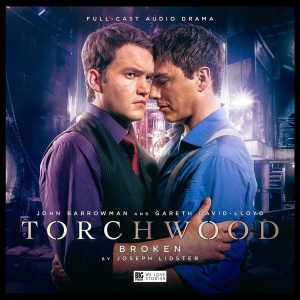 Beginning in the immediate aftermath of Cyberwoman, in which Ianto Jones’ girlfriend Lisa (the eponymous half converted cyberwoman the episode was named after) died, before weaving its way through the middle half of the first season of Torchwood, Broken is a multi-angled study of a man trying to come to terms with everything that he has seen, done and lost in the pursuit of his career, while he grimly clings on to the one thing he has left. His job. The quiet man, and backbone of Torchwood, Ianto was never really given the space, as a character, to breathe during the show’s opening stories and only really came into his own when his burgeoning relationship with Jack allowed the spotlight to occasionally shine in his direction. Yet, the mystery of how his relationship with Jack developed and changed, of how he came to forgive him after Lisa’s death, how he discovered his place and role on the team and what happened to him to make the Hub become the centre of his whole world were omnipresent throughout the series.  Now howevere, all of those questions, and many more, are answered in Broken, when Ianto opens his heart to a stranger, finds a home away from home, solves a mystery rooted in extra-terrestrial (and not so alien) greed, starts to come to terms with who he is and what he’s done, is saved and rescues Jack. As if that wasn’t enough, it even features that rarest of rare Torchwood beasts, an ending in which everyone lives happily ever after. Got you, there’s no such thing in Torchwood, because, as usual, not everyone lives, and happiness is relative when you spend your days ensnared in conspiracies and battling the things that constantly emerge from the rift. That said, if there was such a thing as a “happy ending” in Ianto and Jack’s Universe, this would probably be as close as it gets to being one.

Joseph Lidster’s story is a masterpiece of, and masterclass in, character driven drama. Tying up numerous loose ends in Ianto’s (and Jack’s) life, as he’s stretched to breaking point and beyond, it explores the importance of individual connection and the very human, very basic need to reach out to someone, anyone who’ll listen and form a bond that allows us to share our most intimate and innermost secrets in times of crisis. It’s an incredibly personal and highly emotional chapter in its hero’s life that features a simply stunning, gut-wrenching and heartfelt performance from Gareth David-Lloyd, one that makes Ianto’s journey from the lowest point in his life to his eventual destination of self-realisation all the more believable and real. Well, as real as something can be in a Cardiff besieged by aliens and all kinds of intergalactic weirdness. And while it is, without a doubt, thanks in no small part to the hard hitting psychological impact of its core plot, one of the darkest tales to have emerged from the Torchwood stable, due to the superb writing and the exemplary work of the cast, it’s also one of the most immediate, moving and involving.  Broken is where everything changes, and Ianto Jones is ready… Tim Cundle