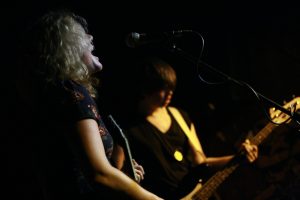 My life changed when I first heard Nirvana’s Bleach album.  Listening to it put me in the strangest mood I’d ever felt, and I’ve never found an adjective in the English language that accurately describes it.  It made me feel dark and tense, but pensive, and roused to life’s possibilities.  And it made me feel driven – it wasn’t just a feeling to feel – I wanted to MAKE it too.  More than anything.  I wanted to make those sounds that made that feeling.

Up until that point I was going to be a doctor.  I was 15 years old and my life was calculus and physics and chemistry.  I had always played music too, I had classical piano lessons from the age of 5 and played the oboe and cello in my school orchestra, but I’d never played music like this.  I taught myself the guitar and started writing songs.  After school I pissed around for a few years then did a music degree and formed my first band, an avant-metal band called El Schlong.  El Schlong was my life and we became DIY troubadours of sorts, moving from our home town of Dunedin (New Zealand) to Wellington, then to London, then on to Berlin.  We spent as much time as possible on the road, doing multiple DIY tours of Europe and Australasia.  I met the most lovely people during our 10 years touring together, amazing people from all sorts of lives that would have been my friends if we’d lived in the same city.  The DIY underground music scene gave me hope in my species and affirmed my belief that there are good people everywhere.  It was visas that eventually saw the end of El Schlong, we ran out of English speaking countries where all three of us could get a visa, so I stayed here in Berlin and the boys went home to New Zealand.  Because most of our time was spent focussed on touring we didn’t do a lot of recording, but here’s the video for the El Schlong song I’m most proud of…

I recently formed a grunge/rock/doom band here in Berlin and we’ve just released our debut EP.  I recorded and mixed it myself, something I’ve been getting into lately.  I’ve become fascinated by the possibilities of the recording and mixing process as an extension of the creative songwriting process.  You can grab a free download here

Murmur Tooth is very new, but some of the darker more grimy songs we play put me in that same mood I felt when I first heard Bleach.  That dark, awesome, heavy feeling that I’ve been chasing my whole life.  That insatiable feeling that is hanging there just waiting to be existed.  That feeling that I felt all those years ago when I first heard music that grabbed my soul and knew I had to make it too.