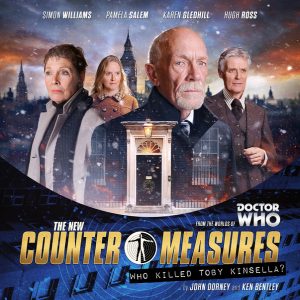 When the last series of Counter-Measures ended, with the team having routed and put paid to the plans of their deadliest foes (The Light), the shocking finale that saw three quarters of the team apparently killed in a series of bombings made sure that their victory was somewhat bittersweet.  Being the last man standing, Toby Kinsella immediately went into denial mode, and as the final moments of Counter-Measures faded away, it was almost as if Ian, Rachel and Allison had never existed. Fast forward ten years, and Toby Kinsella is in the closing stages of his grand scheme to wipe the remaining vestiges of The Light from the face of the Earth, as even though his comrades in arms may be gone, the work continues. However, the problem with living a life of espionage and intrigue is that as you drift through it, you make a lot of enemies and sooner or later, one of them is bound to catch up with you. Which is exactly what happens in Who Killed Toby Kinsella?

Appearances can be deceptive, especially in the murky underworld of half-truths and impossibilities that the Counter-Measures group existed in. Following Toby’s assassination by an unknown adversary, his old colleagues come in from the cold to solve his murder and upon learning that the killer is hell-bent on extracting his vengeance for the sins of the past and discovering that Toby is just one of a group of potential victims, they race to try and save the others.  Ten years is a long time to be out of the game though, and Allison, Ian and Rachel find themselves on a steep and unforgiving “training” curve and the potential fallout for the world if they fail in their duty is beyond imagination, as a successful outcome for the oil crisis that threatens to engulf the West in another major conflict which could end in a global war, depends entirely on them succeeding in their mission. Rusty, out of shape and back from the dead they may well be, but Counter-Measures aren’t about to let a few niggling little things like that stand in the way of them saving the world and bring Toby’s killer to justice.

Wonderfully mired in the double-dealing, treachery laden corridors of power and the nefarious individuals who vie for supreme control within its enclaves, Counter-Measures has always been a fast moving, character fuelled, intelligently plotted series, and New Counter-Measures picks up immediately where its predecessor left off and sticks rigidly to the same formula as it forebear did. It is, essentially, the same series, albeit one given a time travelling facelift that’s propelled headlong into the nineteen seventies.  The writing, courtesy of Messer’s John Dorney and Ken Bentley is first rate, as are the cast, and while the team may not be fighting the usual extra-terrestrial antagonists and other-worldly menaces this time, the shadowy activities that they uncover allow normal (well, as “normal” as it ever gets in Counter Measures) service to be resumed in the midst of an exhilarating and absorbing adventure.  Jolly good stuff … Tim Cundle