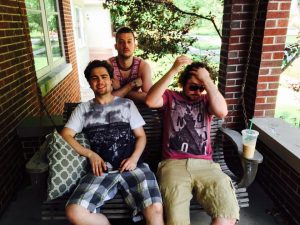 I had one week left before I left University. Not to graduate, but to “take a leave of absence”.

I was staring at the cloudy ice in my almost finished whiskey on the rocks, just casually shaking the cubes around to take the last sip. Before my lips could touch the glass, I hear a voice not too far away from me. “Hey man, this is a party for you guys… Drink as much as you want!” I quickly turn around, while simultaneously, but ever so graciously, receiving a very generous pour of jack Daniels, that makes it all the way to the brim of the glass causing me to take an emergency sip before it spilt all over the floor.

The man holding the bottle was my Sound Engineer and Electro-Acoustic Ensemble professor. He had invited everyone from the class to his leaving party, which, in America, isn’t very common….

I was having a great time, with all the snacks, drinks and even live acoustic music that some of the older students performed, time seemed to fly by. All of a sudden, I realize that its 4 AM in the morning. I’m slightly/very inebriated at this point, but nimble enough to help someone clean up a giant red wine stain on the lovely white carpet of this house. I may have had something to do with that…

After helping clean up the mess, I realized almost everyone had left. I do a good 360 degree look around the room and I notice an older man, 85-ish, sitting in a chair, just staring into the ether. I honestly thought he was asleep with his eyes open. I walk over and sit on the couch next to him and all of a sudden he turns so me and says, “Jack Daniels? I don’t drink anything else but Jack Daniels!” Then proceeds to clink my glass. That’s when it hit me. I was sitting next to John Appleton. He co-invented the very first digital synthesizer called the Synclavier and other models after that.

We began chatting for what felt hours. He wouldn’t stop talking about countless stories from the past that I wasn’t very interested in. I was just waiting for him to stop talking, so I could ask him just ONE question. He finally stopped and paused to take a sip of his drink and I asked.

“If I want to play music, what should I do?”

He leaned over to me and told me straight up

Then he passed out… I took the glass out of his hand and helped him up off the couch. Helped him down the narrow staircase of the house and hailed a cab. Before he got in, he put his hand on my shoulder and looked at me dead in the eyes and said, “Just go do it! The longer you wait, the longer you’ll be waiting in line at Guitar Center.” Then he hopped in the cab and left. It was like getting struck by lighting and it all made sense to me. You can’t learn everything from a textbook. If you want understand how the world works, you have to go out there and see it.

I’ll remember that moment for the rest of my life and it’s some of the best advice I’ve ever been given. Always keep trying, never stop and you have to put yourself out there no matter how far you may have to go. That was my inspiration.

Settle Down is due out on July 29th.