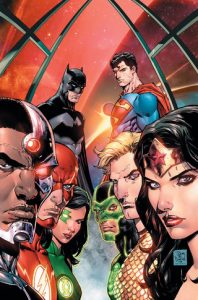 Well, it’s that time of the week again folks, the one where, for your benefit and at the great personal risk of being overwhelmed by an excitement induced transient ischaemic event or driven to an adrenaline induced cardiac attack, I dive headlong into the latest four colour adventures to have emerged in the wake of DC’s Rebirth. The books are in; they’ve been read, studied and scrutinized and the first title out of the blocks this week is Justice League: Rebirth #1.  If you’re not already a fan, it’s the perfect place to admit your error, rectify the mistake and jump straight in, as the action flows thick and fast from the off with the League battling a gigantic monstrosity from beyond the stars, while welcoming their latest Green Lantern Corps recruits and the new bastion of red, white and blue, Superman (the one from another Earth who now protects this one) to their ranks. Revolving around the trust issues from both Superman toward the League (and his new home) and the League toward Superman, Bryan Hitch has kicked off his run on the Justice League in fantastic style. Both the prose and art (the inks being provided by the more than capable and always able Scott Hamna and Danieal Henriques) are just incredible. Yeah, you heard me. I went there, I said it and you know why I did? Because it’s true. 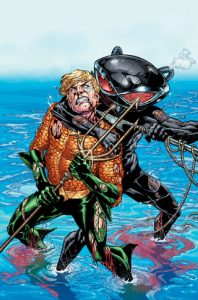 Next up, it’s Aquaman #2 and Dan Abnett – and yes I know it’s still early days – is just crushing it on this book. He’s reinvented Arthur Curry; not completely, but he’s tweaked him enough to make him more personable, which adds gravitas to his showdown with Black Manta in the burning ruins of Spindrift. It’s one of those make-or-break moments for the title character and he passes with flying colours, although I have to say I’m more than a little intrigued about where Dan and his amazingly talented comrades in art, Scot Eaton and Wayne Faucher are going to take Aquaman next. 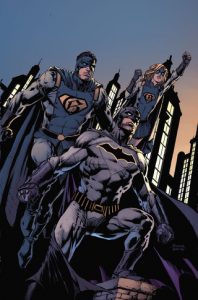 Then there’s the always dependable and ever reliable Dark Knight; and in Batman #2, following the shock appearance of Gotham’s latest heroes – Gotham and Gotham Girl – at the end of the first issue, Bruce has decided to keep his new “allies” close enough to observe them and ascertain why they’ve suddenly materialized.  It’s evident that he doesn’t trust his latest shipmates in the war against crime, but that’s Batman. Suspect everyone of everything until they prove you wrong. Or right, as is usually the case. Keeping the latest Robin at arm’s length, and following a cataclysmic confrontation with Solomon Grundy which draws a reluctant Jim Gordon (who more than shares his old friends’ suspicions) into the black web currently being woven just out of sight in Gotham. David Finch, Matt Banning and Danny Miki are hitting homerun after homerun with the pencil, inks and colours on this book, and Tom King’s story of lurking paranoia and an omnipresent danger that could reveal itself at any moment is one of the highlights of the current DC creative calendar. 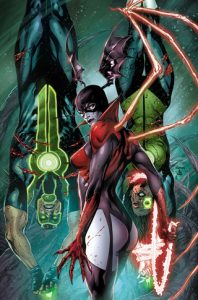 Look, I’m the first to admit that I wasn’t immediately sold on either Simon Baz or Jessica Cruz as the newest Corps recruits protecting Sector 2814, but Sam Humphries has done one heck of a job so far, and despite a few reservations I’m really starting to buy into, and believe in, both of them. Green Lanterns #2 continues the Red Lantern stealth (although it’s not quite as stealthy as it was) invasion of Earth, and as more and more civilians become infected with Rage in this gorgeous looking book (that’s right, Robson Rocha, Jay Leisten and Blond, I’m talking about you guys. Credit where credit is due, the artwork is pick your jaw up off the floor good and then some) Jessica learns the hard way that sometimes duty is more important than family as she, and her new partner, prepare to face the impending onslaught. 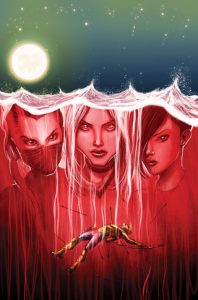 While it may have taken me a while to warm up to the latest Corps members, the exact opposit was true of Green Arrow.  By the end of the first page of the first issue, I was an Oliver Queen convert thanks to Benjamin Percy and Otto Schmidt’s noir flavoured and highly stylised tale of Seattle’s homeless population being sold into slavery. In Green Arrow #2, having been “killed” by one of the people he trusted most in the world, Oliver beings to fathom the depth of the conspiracy that he’s caught up in, as broken, destitute and “legally” dead he’s forced into having to try to clear his name, clean up his company and his city the old fashioned way. With his bow, his quiver and more than a little faith in his ability to get things done the hard way. I don’t know how many times I’m going to say this, and I’m probably repeating myself, but for the love of Gaia, if you’re not already reading this book, drop whatever it is you’re doing (unless you’re holding hot liquids or small infants) and add it to your pull list right now.  Do it. 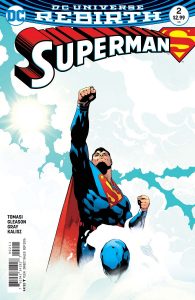 Finally, for this week at least, it’s Gleason and Tomasi’s ongoing tale of the Son of Krypton in Superman #2, which continues to define and expand upon his relationship with his son, which is both endearing and intriguing, and his role as the guardian of his new home.  Character driven, but featuring a plot that only scores high on the swerve, twists and turn count but displays an uncanny mastery of the cliff-hanger, it’s a book that looks every bit as good, thanks to Mick Gray and John Kalisz, as it reads and might just make a believer, and a Superman fan, out of me yet.