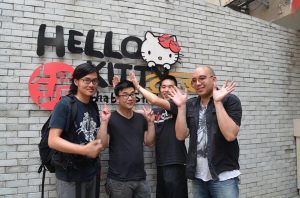 Hailing from Portland, Oregon, The Slants aren’t your typical rock band. For one thing they label their brand of musical majesty “Chinatown Dance Rock,” a label that suits their style perfectly. For another, every member is Asian-American (emphasis on AMERICAN). Not only have they been in a years-long battle with the Trademark Office to trademark their band’s name, they work hard to battle the stereotypes and stigma surrounding the Asian parts of their ancestry. Whether battling the monsters of bureaucracy and ignorance or conquering audiences with their energetic songworks, The Slants always give 110% just like any red blooded Americans should.

MM: How did you celebrate when you were finally able to trademark the band’s name?

Tyler Chen: We were excited to celebrate with our families, friends and fans, who have fought for all of these years alongside us, so we had a big party/concert at one of our favorite clubs in Portland.

Ken Shima: I had a few drinks at our celebration show!

Joe Jiang: Cautiously. At this point, it seems like the trademark registration is mostly about a legal victory, and until all the parties stop appealing, the battle continues.

Simon Tam: I woke up to the news through a Twitter notification. Around 6am, when the news broke, the lead attorney for the ACLU tweeted, saying “I love the idea of Simon waking up to victory.” I wasn’t sure what it meant, but then saw an email from my attorneys with the decision – but because they didn’t say anything either way, I had to dig through dozens of pages of legal writing before I finally saw the incredible news that we won! As Joe mentions, the victory was definitely an important one, but now we’re pending before the Supreme Court.

MM:  Did any of you have to sell organs to pay the legal bills?

Tyler:  Great question!  In case you are referring to our song lyrics from the song Kokoro: “Do you want to blow me up and sell my guts? Send them overseas?” Luckily all of us still have our vital organs, even after our tour to Asia!

Joe: I tried selling a keyboard to pay for the plane ticket to DC.

Simon: No organs, but for a while, I was working 3-4 jobs to help cover the costs. Later in the process, I finally had a small crowdfunding campaign for the case, and many people were generous enough to help us with the expenses. With the next round before the High Court, it might be possible since the costs continue to go up!

Ken: Simon can function with only one lung, one kidney and half a liver.

MM: How difficult was it to separate yourselves as legal crusaders from, not only your lives as musicians but also your lives as regular people with jobs and families?

Ken: Not difficult at all. I represent and stand up for what I believe in everyday.

Joe: I’ll never be a legal crusader. I joined the band as a musician and the sooner we can focus all of our attention on that the better. That, of course, doesn’t stop the conversations I have from veering towards the court case all the time.

Tyler: My life as a musician has always been hugely interconnected with my personal life, however, our legal crusade has made The Slants more of a household name than ever before – so now when I meet someone new and they ask me what my band’s name is, 3 out of 5 people have heard of the band, even if they’ve never heard our music.

Simon: Over the years, I my activism and my art have continued to grow together. My values are embedded into nearly everything that I do, so it was natural to fight against the government when we discovered they were hurting marginalized communities by upholding an outdated law. If anything, this legal fight made it even more natural to combine these different parts of my life together.

MM: What kinds of problems have you run into now that you’ve won such a huge legal battle?

Joe: Being grouped together with The Redskins incorrectly is a problem and the coverage on the Federal Court victory just seemed to promote that false narrative. Even if the law involved links our cases, we are not the same as The Redskins.

Tyler:  As Simon will most likely explain, even after winning in Federal Appeals Court, The Federal Trademark Office is still wanting to fight, so we will be going to the Supreme Court.

Simon: Yeah, going to the Supreme Court has it’s own set of issues. It means quite a bit more work and the possibility of being more connected with the racist football team. However, it also means that our recent victory would be finalized at the highest court in the country.

MM:  Now that The Slants is a trademarked name, you have released a stunning new album. What made you decide to record new versions of old songs?

Simon:  We don’t actually have the trademark registration yet, we do have a trademark from using the name so much over the years (weird, complex trademark laws). However, we wanted to find a way to pay tribute to our first ten years as a band…both to honor our previous members as well as acknowledge all of the incredible experiences we’ve had along the way. It also lets us reflect the evolution of these songs we’ve been playing since the beginning.

Tyler:  Over the years, with changes in our lineup, we gradually changed the way that we played many of our songs live. We thought that it would be awesome to pay homage to our old songs, recording the newest evolution of the songs and have a record with our new singer – better representing our current sound.

Ken:  We wanted to represent our new sound. As the new vocalist I was happy to be stepping into this awesome spot in the band, and this project has been very rewarding for me.

Joe:  I joined the band during the process of recording this album and it seemed like a smart way to introduce the new line up with re-imaginings of The Slants’ best songs. If you look at the art work of the CD, it’s also a nice way to pay tribute to all the members whose been a part of the band. 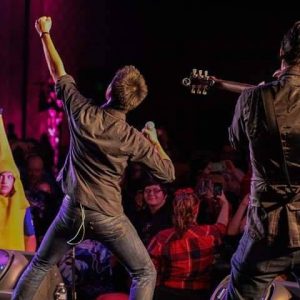 MM:  How long did it take to choose which songs would be included on Something Slanted This Way Comes?

Simon:  Indeed, our compromise for songs that didn’t make the cut was to think about releasing another “best of” one day. But I think we had a pretty good idea of what we wanted so it was really only a couple of email exchanges within the band before we started the recording process.

MM:  How long did it take to bring this album together? Were there any roadblocks?

Simon:  We worked on the album on and off over 8 months. It was tough because of a couple of different factors, like making sure new members learned the songs and “owned” them enough to be able to put their own spin on it.

Ken:  We had a couple of line up changes when we started recording, so that definitely delayed the process a bit.

Tyler: I got a really bad cold and lost my voice before tracking my backup vocals, so I could hardly get sound to come out of my mouth while trying to sing.  I would nurse my throat with tea and honey for 20 minutes, then sing a line, then repeat.  It was awful, but I was able to finish all but two songs on the record!

MM:  Was it a conscious decision to change song parts or did that happen organically as new members joined and older members heard/felt things differently?

Ken: It was a good combo of both. As a musician and as an artist I wanted to add my own flare as well as revise some of the work that had been done, while staying true to what was originally written.

Joe: I think it was important to add new personality to the songs and I tried to do that with my guitar parts. It wasn’t about negating what came before as much as moving the band forward creatively. I started introducing ideas and riffs that will definitely become more prominent when we start on our next album.

Tyler: Some changes were conscious and some were organic.  For example, we consciously changed a lot of our synth parts on the new record, but guitar parts have organically changed with each new guitarist that joined the band.  Our first album, “Slanted Eyes, Slanted Hearts,” had mostly programmed electronic drums, so the parts that I play live have always been very different than on the original record.

MM: Now that the current line­up has recorded and released an album together, will there be a tour? When can we expect a follow-­up album consisting of new tunes?

Joe: We have a lot of shows planned for August and a tour following that. I am all about the new songs we’ve been working on too and hopefully we will start adding them to our set soon. Music and songwriting is a huge part of why I joined The Slants and I guarantee our new tunes will please the old fans and win over new ones.

Simon: Fans can always count on us hitting the road every few months, but we’re definitely spending the rest of this year focusing on writing/recording new music. I hope we can release a new album for Spring next year, especially as we do another national tour.

MM: For The Slants, art and activism tend to be one and the same. How will you use your influence and platform to continue to make the world a better place?

Joe: I said earlier that I will never be a legal crusader, but I do believe in being an activist and fighting for the right causes. To have an audience is a privilege that should not be taken for granted or abused. It’s not about politics but rather standing up and being the voice of the underprivileged and underrepresented.

Simon: I have this goal that I’ve set for myself to go to sleep every night leaving the world in better shape than it was when I woke up. Sometimes that means creating new art that can give people a reason to celebrate, other times that means telling someone I know to make sure that they’re loved. I believe all of that is the purest form of activism – just being actively engaged in the world to make it better for everyone in it.

Ken: We will keep fighting for our name and for what we believe in!