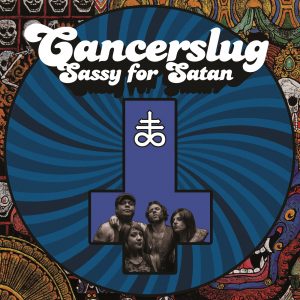 Cancerslug has long been known for the deep depravity of their lyrics. Their fans, called Slugs, are fervently loyal. I’m not sure how they will react when the realization sets in that Sassy For Satan is, in fact, disc one of a two disc goodbye from the band to their fans. While frontman Alex Story has yet to disclose exactly why CS is removing themselves from the music scene it’s likely that his new found partnership with Doyle Wolfgang von Frankenstein of Misfits fame is at least a part of the answer.

Sassy For Satan is probably the best produced Cancerslug album ever to hit the airwaves. Alex and company have really spent a lot of time and money carefully crafting these songs in order to give their fans the sendoff they deserve after so many years of devotion. These eighteen tracks are as much a tribute to the Slugcult as they are a collection of great tunes for those with a skewed view of the world. Encompassing a sound that draws in influences as varied as the popular rock of the 1960s and 1970s and 70s and 80s punk rock with a dollop of early heavy metal… Alex Story does whatever it takes to write, record and play great music. Sassy For Satan is truly a masterpiece of modern underground rock and I’m sure that it will be on my iTunes playlist for the rest of my life. Jim Dodge