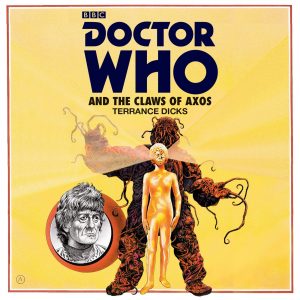 It’s not often that I find myself entering into heated debates about Doctor Who; as, being the modest chap that I am, I naturally assume I’m right and refuse to enter into any discussion that might impugn upon my self-delusion. Alright, so most of the time I’m actually wrong, but one such conversation revolved around my belief that the modern incarnation of Doctor Who owes more to the early seventies era, and more specifically the Third Doctor’s tenure, than any other period of Who’s history.  Combining science fiction and action in equal measure, it was during Jon Pertwee’s time in the role that the Doctor became an almost traditional hero; and if it wasn’t for him occasionally using extra-terrestrial martial arts and getting involved in the odd bit of sword play, having him later assume the role of a solider during the Time War would have been almost inconceivable. UNIT also became a firm fixture in the Whoniverse in the nineteen seventies when the Third Doctor joined them as their scientific advisor, and while they were mostly missing in action for more than thirty years, when they returned to Who, they did so with a bang. And last, but not least and probably most importantly, it was while the Third Doctor was stranded on Earth that, arguably, The Doctor’s greatest foe The Master first appeared to threaten first the Earth, and the Universe, with complete and total destruction.

Talking of The Master, in The Claws of Axos, he returns to once again plague the Doctor and UNIT, although this time he does so in an incredibly uneasy alliance with the vampiric, gestalt entity, Axos.   Originally beamed into the consciousness of the nation via the cathode ray in 1971, like most of the Third Doctor’s adventures, it’s stood the test of time, mainly because as well as pitting the Doctor against his nemesis and a creature that feasts on energy, he’s also forced to fight the greed, petty power struggles, narrow mindedness and selfishness of bureaucracy. The latter being something that everyone can easily relate to, thanks to living in a never ending age of political idiocy and constant turmoil.  Terrance Dicks novelisation goes into far more depth than the original serial did, adding extra dimensions to both the story and the characters, main and supporting, involved and their relationships and interactions with each other and Richard Franklin’s (good old Mike Yates himself) energetic and on point narration of the tale lends it a timeless quality that lets it escape the confines of its period setting.  You know what? If you didn’t know that The Claws of Axos was part of the Third Doctor’s mythology, you’d swear blind that it was from the Eleventh Doctors stewardship of the Tardis. Some stories, like good wine, just get better with age. And this is one of them…  Tim Cundle