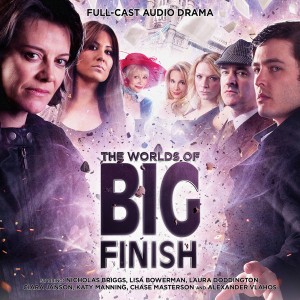 The Worlds of Big Finish – Starring Nicholas Briggs, Alexander Vlahos, Lisa Bowerman, Chase Masterson, Katy Manning, Laura Doddington, Ciara Janson, Barnaby Edwards, High Skinner, David Menkin, David Warner, Michael Thomson, George Rainsford, Terry Molloy, Rebecca Night, Katharine Mangold, John Dorney, Rhys Jennings & Rosanna Miles & Written by David Llewellyn – 4xCD / Download (Big Finish)
In the four colour universe they’re known as Crossover events, big, bold storylines in which characters whose lives couldn’t be more different suddenly find their fates intertwined in a tale that more often than not, usually ends in a world changing finale. Like most of comic book fandom, I’m a huge fan of these events, so when Big Finish announced that they were going to do something similar with their homespun characters and series (Sherlock Holmes, Dorian Gray, Vienna Salvatori, Iris Wildthyme, Bernice Summerfield and Abby and Zara from ‘Graceless’), my pulse stared pounding a little quicker, my level of general excitement and nervous anticipation slowly began to build and I might even have begun to gibber a little bit. I say might, as I can’t be sure what happened, my level of animated delirium upon discovering their plan was such that I can’t be sure if I was or not. Gibbering that is. Anyway, I think it’s safe to say that I was looking forward to ‘The Worlds of Big Finish’, but sometimes we (I say we, I mean me of course) build these things up in our imagination to such a degree that they can’t possibly live up to our (that is, my) high expectations, and as such, I was a little worried that maybe, just maybe, it wasn’t going to be as good as I hoped it would. Oh, how wrong I was to have ever thought such things. How wrong indeed.

Rather than being a “crossover event” as such (although there are elements of such in the production, as several characters do cross paths), more a series of stories linked by a common thread, ‘The World of Big Finish’ finds each of the heroes, anti-heroes and heroines on the trail of a rather special book. A book that shouldn’t exist in our Universe, a book that predicts the end of the world at the hand of the Gommegog, a race of inter-dimensional aliens hell-bent on destruction and annihilation, and a book that the followers of these beings from the space between space and those enraptured by them will do anything to destroy and by doing so, ensure that Earth falls to the bellicose extra-terrestrials. It’s a series of stories that takes us from the confines of the Infinite Library and the murder mystery that Abby and Zara find themselves embroiled in to the streets of London as Holmes, at the bequest of his brother Mycroft, races to prevent a seemingly mad bomber continuing his reign of devastation. From there we’re propelled to Newport (that’s the one in South Wales don’t you know) as Dorian Gray, once again, finds himself in dubious company and is forced to battle spectres from the beyond as fights to save the lives of his friends after which Iris and new companion Captain Turner become the vanguard against alien invasion, along with a television documentary crew, in the modern day capital. Then it’s Vienna’s turn, as she’s hired to find a missing person and the book (yes, that book) they stole from someone they shouldn’t have in the gambling hub of Mars, a job that goes horribly wrong when it turns out to be everything that she hoped it wouldn’t, before Bennie finally saves the day on a far off world, in a far off galaxy, by finally putting paid to the machinations of the Gommegog (I hope that’s how you spell it, because I wouldn’t want to upset them) on an archaeological dig involving a centuries old corpse that shouldn’t be there, the shattered remnants of a space-ship and all manner of duplicity. All because of a book. But what a book, and what an adventure.

‘The Worlds of Big Finish’ pushes the excitement accelerator through the floor and holds it there until its dying moments, and even my lack of familiarity with ‘Graceless’ didn’t prevent my becoming fully absorbed in Abby and Zara’s adventure. As for the rest of the ensemble characters, and the performers portraying them, they all step up to the plate admirably, and thanks to the structure of the drama, each is given a chance to shine in their own environment. It’s wonderfully executed, plotted and paced and David Llewellyn’s attention to detail and familiarity with the characters (some of whom he’s previously written for, others he hasn’t) is the key to, and lies at the heart of, the success of ‘The Worlds of Big Finish’. He (along with Scott Handock) had a magnificently huge and brave idea, and it paid off. It paid off big time. Fantastic… Tim Mass Movement