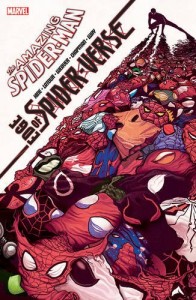 The Amazing Spider-Man: Edge of Spider-Verse – David Hine, Fabrice Sapolsky, Jason Latour, Clay McLeod Chapman, Gerard Way, Dustin Weaver, Richard Isanove, Elia Bonetti & Jake Wyatt (Panini / Marvel)
Before the dust had even had a chance to begin to settle in the wake of ‘Spider-Verse’, I started thinking about all of the alternate versions of Pete and Spidey that had answered the clarion call to fight for their own; of all their web-powered brothers, sisters and whatever-else’s future, and those that had fallen in – and before- the “Spider War”. Who were they? What were their stories? How did they become Spider-Men and Women? While I was pondering those questions and their multiple variations, the House of Ideas saw fit to at least answer some of them by providing five tales of Spider-Men (and Women) from different realities and how they became involved in ‘Spider-Verse’, some of whom made it to the final showdown, and some of whom didn’t even make it past the first hurdle, victims of The Inheritors hunt and endless quest for food. And these are their stories.

Before we even begin, I’m going to be absolutely straight with you. Don’t go looking for them and don’t expect any, because there aren’t any clunkers in this collection and it is, as the kids back in my day were so fond of saying, ‘all killer and no filler’. Each chapter/ issue/ story – call it what you will- has been written by a deft, creative hand; and while Gerard Way’s ‘Sp//dr’ is strikingly original and Dustin Weaver’s ‘Aaron Aikman Spider-Man’ is intriguing and enjoyable enough, both drew the short straw when they found themselves nestled alongside David Hine and Fabrice Sapolsky’s ode to the age of pulp heroes ‘Spider-Man Noir’, Jason Latour’s retro-tastic ‘Spider-Woman’ (in which the Gwen Stacey and Peter Parker mythology is completely rewritten) and the gloriously horrific, fangtastic, Twilight Zone meets What-If offering from Clay McLeod Chapman and Elia Bonnet, ‘I Walked With A Spider’. When the “weakest” contributions stand head and shoulders above ninety percent of the books filling the shelves of comic book stores worldwide, it becomes fairly evident that each of the writers and artists involved in bringing their creations to ‘Edge of Spider-Verse’ is in a wonderful league of their own, and that each has poured their heart, soul and limitless inventive energy into the book. It may not answer all of your questions, but at least it’ll answer some, and that’s as good as place as any to start, right? Spider filled fun for all the family! Tim Mass Movement