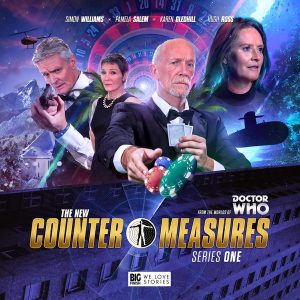 Sir Toby, Rachel, Alison and Ian “Chunky” Gilmour may have themselves in a new decade, but  rest assured, for intents and purposes, they’re the same old Counter-Measures, ready to face and fight strange and bizarre enemies and to defend Britain, and the world, from all manner of mysterious threats. Having been reinstated after being lost in the “wilderness” for ten years, Counter-Measures return to action in the decade that time forgot, one famous for the three day week, the oil crisis, glam rock, dystopian Science Fiction and drama and crimes against fashion that have remained unpunished to this day.  Times may have changed, but the danger remains the same and against the  grim early seventies backdrop of a country caught in the middle of social and economic change, Sir Toby’s team are once again the first line of defence in the perpetual war against those who would subvert the status quo for their own nefarious purposes.

Over the course of four new adventures, Counter-Measures bring to justice a team of criminals using a cutting edge invention whose existence could theoretically destabilise global systems of jurisprudence (Nothing to See Here), prevent a psychic super-weapon emerging from its submerged slumber and launching Armageddon (Troubled Waters), uncover and foil a domestic attempt to fashion even more deadly forms of biological warfare (The Phoenix Strain) and finally  attempt to bring down an arms dealer moving into the supply of stolen alien technology in a time bending scenario in which nothing, and no-one, is what they first appear to be (A Gamble with Time). It’s breathless, intelligent, heart stopping stuff that seamlessly combines intrigue, espionage, peril and drama with superb characterisation and flawlessly executed and wonderfully written and performed stories. While the players may be a little older, and doubtless wiser, the main cast don’t miss a beat and as a whole, deliver spot on performances  as they step back into their Counter-Measures roles , proving the adage that the only thing that changes between comrades and friends is time.  The world may have moved on, but Counter- Measures while new in name, remain absolutely the same. And I suspect that they, just like their devoted audience, wouldn’t have it any other way… Tim Cundle