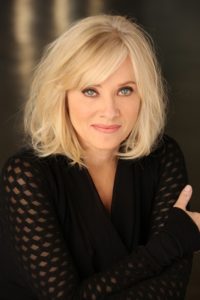 Ahead of Horror Channel’s UK premiere broadcast of WE ARE STILL HERE on Sat Jan 14, legendry actress Barbara Crampton talks exclusively on the revival of her career, her approach to challenging roles and why she loves the genre, but not the over-used label ‘Scream Queen’!

Q: Suddenly you are back in the genre spotlight after many people thinking you had retired.  What happened between your 80s heyday in movies like REANIMATOR and FROM BEYOND and the more recent YOU’RE NEXT?

BARBARA: I had retired. But it wasn’t really intentional. I was in my late 30’s and hadn’t been offered anything significant in quite a while. Roles in my age bracket for women were slim. Around the same time I met my husband Bob, got married and became pregnant. He had a career in a more stable business and was offered a great opportunity in San Francisco. I suppose I was ready for a change and a chance to build a family life with him, so off we went. Soon after our first son was born, I was consumed with motherhood and then was also expecting my second child – a girl. I embraced this new chapter in my life and was not thinking about acting or movies, except as a spectator, for a long time. I’m glad though that I had the break to focus on my kids and be there to help out at their school and build a life I had dreamed about but seemed to elude me for many years. The offer for YOU’RE NEXT came literally out of the blue and I was grateful my agent hadn’t lost my number as we hadn’t even spoken in something like six years. I believe I was really lucky to return in a film that was really successful and seemed to receive a lot of attention for the film makers involved. So once people knew I hadn’t keeled over, I began to get a few more inquires for work. I think being older has helped me also. I’m playing mothers, caretakers, doctors and soon a woman running for Governor.

Q: WE ARE STILL HERE receives its UK premiere on UK’s Horror Channel on Jan 14, 2017. What attracted you to the project?

BARBARA: Firstly, I’m thrilled the Horror Channel is broadcasting the film. They really are dedicated to the genre in a passionate and intelligent way. What attracted me to the project was that I responded to the depth of misery Anne was experiencing. She lost her only child in an auto accident. How does someone recover from that? The challenges interested me as a performer and I wanted to bring as much truth to the role as possible. It also felt very 80’s to me with a Lucio Fulci vibe. How could I possibly turn a gift like this down? That’s what this part felt like to me – a gift.

Q: You met WE ARE STILL HERE director Ted Geoghegan because he was the publicist on YOU’RE NEXT. Were you flattered he wrote the part of Anne for you?

BARBARA: Of course! Although he didn’t tell me initially he HAD written it for me. I think he was nervous about that, for whatever reason. When I first read it I was immediately drawn to the character and felt a connection to Anne. So after a time I was thrilled he had secured the financing and knew we’d be on our way.

Q: To prepare for the role of grieving mother Anne, you talked to two women who had lost their sons in car accidents. What were the most important things you learned during this research process?

BARBARA: Interviewing these two women was pretty difficult, yet thankfully they both were more than willing. It was important for me to understand their grief as much as possible and do them justice in portraying their pain. Both ladies are very strong and not surprisingly this loss is the most devastating and significant thing that has ever happened to them. They told me how their relationships with their husbands suffered. How they themselves wanted to die. How tired they were all the time. Grief is really exhausting. They each talked about moments when they felt ok and could even share a light or fun moment with someone and then would feel immediately guilty for having done so. The pain was always there and is always there. It becomes absorbed in your DNA forever. I carried their answers with me every day on pieces of paper. I would read them each morning before filming and talk to Ted about these feelings on set as if they were my own to put myself in their head space. Ted would sit with me and he was such a calm and gentle presence and he would sometimes hold my hand. I think we created a space not unlike what those two women may have experienced when they would speak to a confidant about their sorrow.

Q: Many critics have pointed out the Lucio Fulci inspirations in WE ARE STILL HERE. Did you know who he was? Were you, and have you remained, genre savvy?

BARBARA: I had seen Fulci’s THE BEYOND and HOUSE BY THE CEMETARY and rewatched HBTC a number of times when Ted told me it was one of his favourite films and wanted a similar feeling for our movie. I think I’ve become more genre savvy since my return to acting with YOU’RE NEXT. I realised that I wanted to rededicate myself to my career and specifically to the horror genre so I’ll confess I’ve become more educated of late, watching movies I may have missed along the way. I try now to watch a few old and new movies each week to keep up with what’s happening, trends and influences. Even so there are movies I’ve missed. GREEN ROOM has been queued up about five times only to be interrupted by another movie or a family crisis. I’ve become more of a genre fan recently. I’ve always liked horror movies but now I love them. You can tell any story in a genre movie.

Q: WE ARE STILL HERE is a supernatural ghost story. Do you prefer that type of horror film than the all-out splatter fest?

BARBARA: There are so many sub genres in horror. The ones that appeal to me are ones with an interesting or unique story and dynamic characters. I like to see people challenged by something and rise up to overcome obstacles, either outside forces or something within themselves. Splatter and gore are great fun but just to show a cool SFX gag that isn’t supported by a greater foundation in story doesn’t really move me. I want to feel something.

Q: You say the house in WE ARE STILL HERE is its own character. Can you explain a little more?

BARBARA: The house was the site of some terrible happenings and it had absorbed the horror and terror. The feeling of the movie was on great display through the remarkable work of our DP Karim Hussain. It’s moodiness, pain and suffering was felt in the angles and lighting used. “Place” is an important element for an actor in a movie and no time ever for me as much as in this film in this character. I thought my deceased son had followed us there. He was present to me when the baseball drops down the stairs and I heard his voice speak to me when the townspeople were descending upon us. I felt him in the walls. At the end of the movie I make a choice that involves staying in the house forever. Did I mention how cold it was? The temperature outside was -27 and the heat inside did not work very well. I was either bracing myself against its chill or leaning in to feel the warmth of a dear departed loved one who appeared to inhabit its space.

Q: Just like Stuart Gordon with REANIMATOR, Ted Geoghegan was making his feature debut with WE ARE STILL HERE. And you produced and starred in BEYOND THE GATES, the feature debut of Jackson Stewart too. Is it more exciting working with up and coming new talent?

BARBARA: It’s exciting to work period. Most actors who have a career do a handful of movies a year if they’re lucky. Most of your time is spent not working and doing regular everyday things. Fortunately, the film festival circuit is quite robust and I’ve spent the last few years promoting movies I’m in and traveling the states and abroad. It’s very satisfying to be around like-minded people who love movies and really get what we do. Also I enjoy meeting other film makers and actors and fans. As far as working with up and coming directors is concerned, these guys were so on it in terms of telling a story and already had vast and deep knowledge of the genre. Ted and Jack had worked in the film biz in various capacities before directing their first films and were completely comfortable with what they were doing. RE-ANIMATOR was the first film experience for Stuart but he had honed a lot of skills in the theatre and any moving picture technology he didn’t understand was greatly helped by our DP, Mac Ahlberg. I find today that the industry is a lot more collaborative and especially in Los Angeles where directors screen rough cuts for other directors and they all give each other notes before any additional shooting or reshoots. That really helps a young director.

Q: Judging by all the movies you’re starring in at that moment either completed or in post-production, you are back with a vengeance! What’s the difference between making movies then and now?

BARBARA: I’m older and wiser and know when to speak my mind. I love the complicated parts I’m being offered now too. Everything is faster because of digital and most people on a set are capable of doing various jobs. It’s also harder to get a movie financed at the level you’d like and to sell the movie to a company that will give you the funds to make your money back. You have to be really tenacious and have a strong attitude and be willing to lose money and still do such a bang up job that people notice you so that you can move up a level. Also people watching movies illegally and not realising how much this hurts the industry is a real problem. Not everyone is successful, some leave the business and do other things. I’m talking directors but it’s really competitive for performers as well. There are so many people in Hollywood. How do you distinguish yourself? Why or how are you unique? Embrace that. Starting as young as possible is a good idea, creating your own content, making movies with your friends, networking…

Q: You’ve recently stated you don’t like the term ‘Scream Queen’ even though you once embraced it. What’s changed? You are now a Horror Icon, do you prefer that description?

BARBARA: The term didn’t used to bother me as much before. But as time has gone by I feel it’s really reductive, overused and not reflective of the kinds of deep and more interesting stories we seem to be telling in this generation. It’s a clichéd moniker given to ladies who are doing amazing work and have had long careers with varying roles. It’s a term that has had its time and is now being used by actresses who have been in one or two movies and who self-proclaim themselves to be a “Scream Queen”. It just doesn’t feel special anymore, if it ever was. You can read some additional thoughts on this by myself and other film makers here