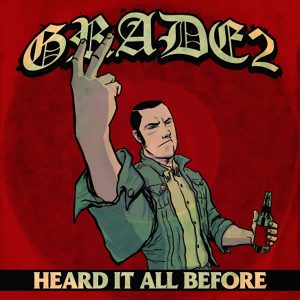 The Oi! boys from the Isle of Wight are back with yet another release, dropping this four song EP right at the end of the year completing a very busy 2016 for them. Their Mainstream View mini-album received an excellent response and rightly so, and this new record goes that bit further in cementing their position as one of the best new bands on the street-punk scene. As with previous releases, their strength lies in the ability to write straight forward catchy tunes with big singalong choruses, whilst retaining their own character and without ripping any one off. If anything, I think their sound is closer to peers such as Lions Law, Gimp Fist or Crown Court rather than the old boy’s brigade and they are keeping things fresh – looking forward instead of staying rooted in the past. Grade 2 really strikes a chord with me on their more melodic moments, especially apparent on Heard It All Before and Take a Step Back on this release, but there isn’t a duffer on here. Fingers crossed 2017 sees a full length drop but until then this will do very nicely thank you. Tom Chapman