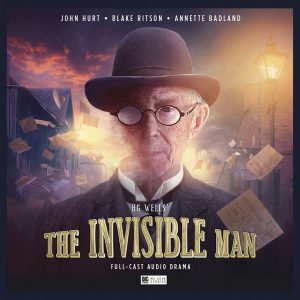 They say that timing is everything, and, as I received my review copy of The Invisible Man on the day John Hurt’s death was announced, reviewing his take as the eponymous character in the HG Wells classic was a bittersweet experience for me. Yes, he is / was the War Doctor, but to me he was also the definitive Winston Smith in 1984 and the poster boy for all sufferers of severe indigestion, Kane in Alien. And, of course, he was the owner of one of the most recognisably melted chocolate-and-gravel voices in recent British acting history.

In this latest Big Finish adventure, he plays protagonist Griffin, arriving at a local tavern in a small village in West Sussex, in the midst of a snowstorm. He wears a long-sleeved, thick coat and gloves. His face is hidden entirely by bandages except for a fake, pink nose, and he wears a wide-brimmed hat. He is, from the off, excessively reclusive, irascible, and a little unfriendly. Griffin wants no more than solitude, but, of course, that would make for a rather dull story, so he finds anything BUT the peace and quiet he craves, and increasingly inexplicable goings-on at the countryside inn start to bring fear to the inhabitants of the village.

As the story progresses we meet a scholar named Dr Kemp and gentleman-of-the-road Thomas Marvel, who are soon drawn into terrifying events beyond their understanding. It would appear that Griffin has, somehow, defied the laws of nature, and is soon to embark on a reign of terror. Because he is, after all, (drumroll please…) The Invisible Man!

Big Finish are releasing all of HG Wells’ works on a bimonthly basis, and The Invisible Man is the first to get the audiobook treatment.  As one of Wells’ more popular and well-known stories, it’s a great starting point too. Jonathan Barnes has adapted the original with a lightness of touch that keeps the prose as close to the original as possible, while making for a beautifully produced, directed and well-paced story. Hurt is clearly having a ball playing a role that gives him an opportunity to show off his ‘playfully psychopathic’ side, and the support roles are given enough character development to make you care about each character’s fate, be they tramps or scholars. Another in a long line of successes for Barnes, then.

I’ve always enjoyed the works of HG Wells, and appreciate that, were it not for him, there would probably be no Doctor Who. Which means there’d be no War Doctor. So, in sense, thanks to the wonderful Messrs. Wells Barnes and Hurt, we’ve gone full circle.  Awesome.  Bex Ferriday