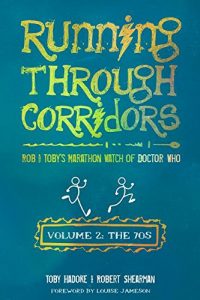 I wonder if Toby Hadoke and Robert Shearman knew exactly what they were getting themselves into when they decided to sit down and watch classic Doctor Who right from the start (quite a job in itself), and then, because this clearly wasn’t a big enough task, write their thoughts, in depth, on every single episode?

Written in Doctor Who’s ‘gap year’ (2009 – the year of the David Tennant specials, but no series) this is not just a review of each episode – this is a love letter to an adored television show and two very personal opinions. Covering the 1970s in all its green screen glory, it starts with Jon Pertwee’s Spearhead from Space and ends with Tom Baker’s much maligned Horns of Nimon. Our intrepid writers don’t always agree with one another’s critiques and each author has their own favourites and ‘wooden spoons’. (Though the fact that neither author seems to like The Creature from the Pit surprises me. It’s a bloody classic!) But this is also very much about returning to episodes that the authors maybe didn’t appreciate or completely understand when they were younger, but now older, wiser and living in what can only be described as ‘interesting times’, see them through new lenses, and make new discoveries.

You may want to sit and read this book from cover to cover. That’s your prerogative and I wish you the best of luck if that’s what you want to do. Indeed, I tried doing this myself, but only got as far as episode 2 of the Ambassadors of Death before feeling overwhelmed by the sheer volume of words on each page. Don’t get me wrong, and don’t whatever you do, let this put you off; all of these words are in exactly the right order and make for some totally blinding reading, but there’s just so many of them, crammed in tiny font on almost 400 pages devoid of any images in a tome larger in size than a standard paperback… so it started to feel a little intimidating. Plus, as my editor needs me to write this review before Christmas 2018, it wouldn’t be practical to read it from the first page to the last. Instead, I approached this by dipping into favourite stories randomly as they occurred to me (The Creature from the Pit, goddamit! Planet of the Spiders!), though I suspect that this may be the book to have to hand when actually watching old episodes as well.

Think of this book as a mash up of the Doctor Who Programme Guide by Jean-Marc Lofficier, with less of a nod and more of a Glasgow Kiss towards 1995’s brilliant Discontinuity Guide, by Paul Cornell, Martin Day and Keith Topping, and you’ll get an idea of how this book reads. It’s funny, honest, unashamedly fannish, and on the strength of being sent this rather brilliant tome, I have now retrospectively bought and am about to dip into Volume 1 (the 60s). The Dominators! Planet of the Giants! FTW! Bex Ferriday