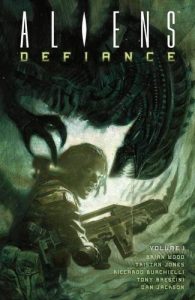 There was a time, not long after I watching Alien for the first time, that I became obsessed with Ridley Scott’s film. I hungrily consumed Alan Dean Foster’s novelisation, reading it over and over again; and when I finally managed to get my own copy of the movie on VHS, I played the tape so many times that I knew the film inside out and back to front. The only reason I stopped watching it was because the tape eventually snapped through over-use. And then James Cameron released Aliens and my love affair with what would go on to become a hugely popular franchise died almost instantly, as the sequel glibly squashed everything that I adored about the original film and story.  Aliens removed all of the overwhelming dread, fear and horror that the Xenomorph had induced in the crew of the Nostromo, treating the species as nothing more than mindless killing machine that in turn was easily dispatched in a nearly endless hail of bullets. It transformed an apex, intergalactic predator that was impossibly deadly and dangerous into just another run of the mill, cinematic monster that could be shot down in flames by any gung-ho yahoo armed with a plasma rifle. While I realise it’s not exactly popular to not be a fan of Mr. Titanic’s vision of the future, it was nonetheless his take on proceedings that caused me to tune out of any, and all, things Alien related until Ridley Scott returned to the series that he created with Prometheus.

So, I was more than a little surprised and genuinely pleased to see Brian Wood go right back-to-basics with Defiance and make the Xenomorph a genuinely chilling, threatening monster again. Instead of having wave after wave of the creatures descend upon his heroes, he’s gone for the less is more approach that made Alien so wonderful, treating the creatures as a genuinely terrifying, nearly unstoppable threat in his dark, unsettling and chilling character driven story. Following a broken Marine and a synth unit who “dreams” of being more than his programming will allow him to be, in their unauthorised quest to rid the galaxy of as many Xenomorph’s as possible in the aftermath of their discovery of Weyland –Yutani’s plans for the species, Defiance is everything that I hoped Cameron’s film would be and so much more. It treats the Xenomorph with the careful respect that it so thoroughly deserves while slowly building its gripping, multi-layered plot and developing well-rounded, three dimensional core characters. Essentially it’s a tale of underdogs rising up, and rebelling against their corporate overlords, and fighting for the good of humanity rather than shareholder profits, but  Defiance also queries the nature of the relationship that exists between sentience and life, champions individual will and freedom and rejects the notion of human expendability. Buoyed by the detailed, luxuriant art of Brescini, Burchielli and Jones that emphasises both the vastness and unimaginable loneliness of space and humanities inevitable reliance on technology and desire to reach out to the unknown, Brian Wood’s story has pulled me back into, and once again piqued my interest in a franchise that I had long felt abandoned by.  Oorah… Tim Cundle