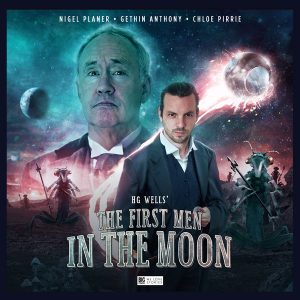 Herbert George Wells (or H.G. as he’s more commonly known), like Verne before him, was a visionary whose works of Science Fantasy and Fiction were not only – when originally published – terrifying and audacious in their content and scope, but also tales of wondrous imagination that doubled as social and moral critiques that served to highlight not only what he saw as the greatest problems of his age, but also the species wide failings of homo-sapiens. While he is most well-known for writing The War of the Worlds, Wells’ other works of Science Fiction, most notably The Time Machine, The Invisible Man and The First Men in the Moon helped to shape and define the literary genre that he is credited with being a pioneering grandfather of. And this latest dramatic adaptation of the previously mentioned The First Men in the Moon perfectly captures the excitement, beauty and majesty of Wells’ novel while accentuating the not-so subtle subtext of the book.

Having met a mysterious, beautiful woman who claims to know him through mutual acquaintances and having gained his trust, Bedford (the protagonist of the lunar affair) relates to her the fantastical account of his journey to the Moon. Fleeing his creditors, Bedford had set up home in the countryside with the intention of writing a sure-fire hit play that would cure all of his financial woes, but instead meets the eccentric and scientifically minded Cavor, who soon tells his new friend about his latest invention, Cavorite, a material that can defy the bonds of gravity. Seeing only the seemingly endless profit in Cavor’s invention, Bedford encourages Cavor’s work, but when the inventor finishes his work and professes a desire to journey to the moon to test it, Bedford reluctantly agrees and only accompanies Cavor to his voyagewhen he sees it as the lesser of two evils having now been found by his creditors.  Arriving on the satellite, they discover that it is impossibly teaming with life, and before they can begin to fully explore, both men are captured by the Selenites, the Moon’s dominant species.  Following a brief period of incarceration, Cavor and Bedford escape, only for Cavor to fall foul of the “moon men” while Bedford manages to return, alone, to Earth.

Changing the end of Well’s story, First Men in the Moon, is a delightfully enjoyable, rip-roaring adventure that utilises it’s different beginning – having Bedford tell his story to the mysterious woman – to increase the tension and tie into a deliciously dark ending that’s oddly more fitting than Wells’ finale.  Playing the flipsides of human nature, curiosity and greed, off against each other, The First Men in the Moon explores the consequences of man’s voracious and slavish devotion to capitalism and wealth while extoling the often ridiculed virtues of intelligence, invention and inquisitiveness. Nigel Planer is superb as Cavor, delivering just the right mixture of bumbling ineptitude and intellectual genius while Gethin Anthony is the ideal yin to Cavor’s yang as the more world wise and pragmatic Bedford.  As ever, Jonathan Barnes has done an incredible job of dramatizing the story, and even though there are one or two uncomfortable moments due to the use of period language, The First Men in the Moon is an astonishingly gratifying and pleasurable way to while away an afternoon or two. Bang on… Tim Cundle