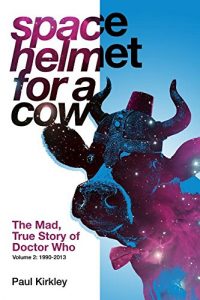 In the first volume of Space Helmet for a Cow, Paul Kirkley provided a sweeping, wry and warm look at the behind-the-scenes story of Doctor Who – not just the greatest TV show ever made, but frequently, as it turned out, the most insane TV show ever made. This first volume covered the years between 1963 – 1990, so volume 2 turns its attention to Doctor Who’s wilderness years and beyond, and examines 1990 – 2013.

Finally, we have a book that answers such burning questions as did Benny and Bjorn from Abba really plan a Torchwood musical called Weevil Rock You? Which Doctors shared a bed? Did Blue Peter and Sad Tony eventually find love? How did David Tennant become his own father-in-law? And was there really a sequel to Carnival of Monsters at Wembley Arena, or did we dream it? I can answer that one – we didn’t dream it, it was an actual thing, and I went to see it at the Motorpoint Arena in Cardiff in 2010. So there.

Where Space Helmet 1 was acerbic and insightful when examining the shenanigans of Hartnell & co, volume 2 has the insight, but cranks the daftness up to eleven. With chapter titles such as Joy as Most of the Underwater Menace Remains Undiscovered’ it is clear from the outset that this book is going to be both as useful as the first, and as bonkers. Yet Space Helmet 2 is more than this. It’s a rich insight into both the wilderness years and the current incarnation of Doctor Who, detailing story-by-story and year-by-year the evolution of our best-loved-made-from-sticks-and-sticky-tape television show that differs from many similar tomes by dint of being written with wit, great humour, and clear love and affection for a programme that has had more changes in its life than the tabloid promise that ‘the next Doctor may be a woman.’ (I believe Sue Perkins and Tilda Swinton are being mooted at the time of writing. I’m not keen on the idea of a woman as the Doctor to be honest, though I’d be up for Sue – she’s quite Timelord-y. Tilda Swinton is far too expensive for the BBC budget though.)

Having lived through this entire period in Who’s timeline, remembering the wilderness years and the frankly perplexing plethora of books and Big Finish adventures during that time, then suddenly hit with the anticipation of whether the ‘new’ series would be any good, Space Helmet 2 serves to remind (albeit with more background detail) all those crazy years of Who-dom including those parts best left in the time vortex (Dimensions in Time anyone?). Best of all it reminds the reader of the absolutely unprecedented success of its return (Who knew? Ha! See what I did there?!)

There’s so much to love in this book that I was genuinely upset when I got to the last page. I relived the last 25 years over a couple of weekends, and was reminded that the sixth Doctor and Ace once got naked in a cave, that Rose returned and then returned, and then returned again, that we assumed it was a continuity error when Matt Smith whispered in Amy’s ear during Flesh & Stone, and the fact that during 2013 the show truly shone, celebrating the 50th anniversary with far more aplomb than the 25th or 30th anniversaries put together (Dimensions in Time, I’m looking at you again). There were so many moments of spit-my-tea-out hilarity that though reading this book may seem an arduous task (damn you Mad Norwegian Press, with your large books, high page count, multiple columns, small print and lack of images!), but it really did end up being effortless and a joy to read. Thank you Paul Kirkley. Not only did I learn a lot about what was going on during those lost years, you make them sound like the funniest ever.  Bex Ferriday