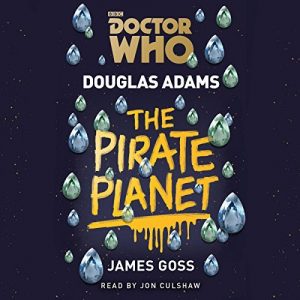 A classic Doctor Who adventure written by a classic sci-fi writer, what’s not to like? Douglas Adams never got to write the novelization of this, due to his commitments to writing something called The Hitchhikers Guide to the Galaxy. Unfortunately, due to his untimely passing, he was never able to write it. Thankfully for us James Goss picked up the reigns and finished the novel, working from Adams’s original scripts, which is now here complete and unabridged in audio book form.

Part of the Key of Time series which originally aired in 1978 and featuring one of my favorite Who pairings of Tom Baker’s Doctor and the enigmatic Romana. En-route to locating the six segments of the key, the duo’s next destination is Calufrax, but they inadvertently find themselves on the planet Zanak, ruled by the strange and mysterious Captain. The people here are happy and everything is hunky-dory. So obviously something is afoot.

Read by impressionist John Culshaw, who does a fantastic job of impersonating Tom Baker and becoming the Fourth Doctor, The Pirate Planet is one of the classic Who episodes of this era. The banter between the Doctor and Romana plays out beautifully, while the story bounds along at a brisk pace, considering that, in this unabridged form, it runs for over eleven hours. You may have to call in sick for this one, as once you get started, you won’t want to stop....….. Chris Andrews