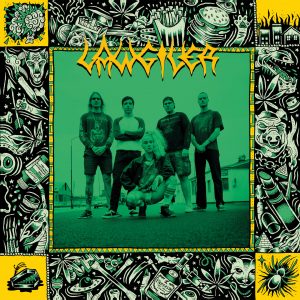 A long time ago, I was bottled in a bar fight that erupted around me while I was trying to enjoy a quiet drink and a few pleasantries with a couple of newly discovered female acquaintances. In the seconds before the bottle struck me and just as all hell broke loose, time seemed to slow down as my nervous system was flooded with adrenaline and endorphins, and in those fleeting moments I was consumed by an ocean of overpowering ecstasy. And listening to Lawgiver is the closest that I’ve got to that feeling in quite a while, as their Born to Expire era Leeway inspired tunes led by the Dawn Crosby-esque vocals of Phat Pat smash your skull in, rip out your heart and ask nothing of you but complete and total circle pit and stage diving devotion.  This is beat-down crossover as it should be played, full of anger, energy and aggression and powered by the kind of songs that could flatten cities. Yeah, Lawgiver are definitely my kind of band. One, two, three, four, here comes the Hardcore… Tim Cundle