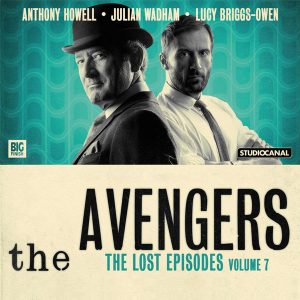 And now, the end is near and Steed and Keel face their final curtain… All good things must come to an end and The Avengers: The Lost Episodes is no exception and in Volume Seven it reaches the end of its run which includes the original series final missing story. It was inevitable of course, after all John Steed and David Keel’s time together was relatively brief and now that all of the tales from the single season that they fought crime side-by-side have been told , it’s time to bid them, for now at least, adieu.  After all, even though all of their documented trials and tribulations have been given new life, who’s to say that they didn’t have plenty of undocumented escapades which have yet to see the light of day? We can but hope that one day soon, both Keel and Steed will, like the proverbial Phoenix, rise from the ashes to stand firm against the forces of chaos once more.

In the meantime though, these final stories find our plucky heroes embarking on solo missions before reuniting for one last hurrah in the battle for law and order. In Dragonsfield, Steed is plunged into the world of espionage as he attempts to discover the mysterious figures behind the sabotage of cutting edge space exploration technology, while in The Far Distant Dead Keel sets out to break up a smuggling operation that’s responsible for the deaths of hundreds of innocent people. Having achieved their objectives (you didn’t really think that they’d fail did you?), they team up, for the final time, to investigate a series of deaths and some rather rum goings on at a viral research facility in The Deadly Air.

And that is, for the time being, that for the initial line-up of The Avengers.  Anthony Howell and Julian Wadham have, in my mind at least, come to embody the roles of Doctor David Keel and John Steed thanks to their finely honed performances as the all action, no nonsense duo of square jawed, stiff upper lipped defenders of all that is right and true. The adaptations of the original stories are razor sharp and lend an almost timeless quality to this trio of tales which stops them feeling outdated in the rapidly changing and evolving modern world. They may well be the product a bygone age, but The Avengers: The Lost Episodes defies such petty concerns as time, is pure escapist fun of the highest calibre and a testament to the power of scintillating story-telling. Mr Steed, Doctor Keel, you’re needed… Tim Cundle