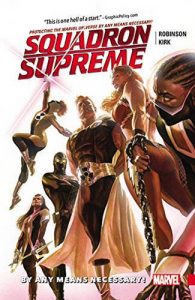 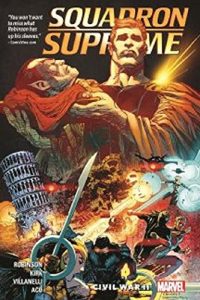 Brought to our Earth (well, the Earth of the Marvel Universe anyway) against their will when their planets died and with no way back, the members of the Squadron Supreme (Nighthawk, Power Princess, Blur, Doctor Spectrum and Hyperion) have banded together to ensure that the place they now call home never suffers the same fate as their worlds. Their mission is simple, to do whatever it takes and By Any Means Necessary to protect Earth and its inhabitants from anything and anyone they perceive to be a threat to their wellbeing.  Being natives of alternate and parallel Earth’s, the members of the Squadron Supreme don’t allow themselves to be governed by the same rules of engagement and jurisprudence as the heroes from their new home and operate according to a different set of ethical guidelines. When they say “whatever it takes”, they mean “whatever it takes”, and in By Any New Means Necessary, they begin by punishing the member the of the Illuminati who they all blame for the annihilation of their worlds, Namor. As opening chapters of stories go, watching Hyperion decapitate (come one, it’s not a spoiler, everyone knows what he did) the Prince of Atlantis and then smash his city into smithereens is not only a statement of intent about both the team and the direction their story is going to head in by writer James Robinson, but also an indication of how different and how “alien” this team and their methods are. And that’s just the beginning as By Any Means Necessary also bears witness to Earth’s newest team of “superheroes” battle the combined might of the Avengers and S.H.I.E.L.D. before falling victim to a traitor within their midst and then freeing a magical realm from the machinations of a formerly deceased “hero” and would-be dictator from the Marvel Universe.  By Any Means Necessary is good, old fashioned blink and you’ll miss it, full throttle action powered thrill-a-minute stuff and no mistake.

Having adjusted to the Squadron Supreme’s methodology in By Any Means Necessary, in the second collected volume, Civil War II, Robinson further explores the characters of the individuals who comprise the team as they set out to uncover a sinister alien cabal discovered by their self-elected leader Nighthawk.  As with any team, some members of the Squadron Supreme are more equal than others (thanks George!) and come to the fore in this story, namely Nighthawk, who seems to have become Marvel’s answer to Batman albeit with the moral compass of Frank Castle, who’s investigation of this mysterious organisation brings him face to face with “himself” and Doctor Spectrum who ends up confronting the man who not only destroyed her home, but also saved her life. Civil War II isn’t a grand, heroic tale of saving the day in a slightly different and incredibly violent way like its predecessor By Any Means Necessary, it’s a more intelligent, considered, almost pulp influenced character study that utilises the “stranger in a strange land” theme that lies at the beating heart of Squadron Supreme to its full advantage and further pursues the idea of extra-terrestrial infiltration by gifting the team their very own arch-enemy, the Myriad. The evolution of their on-going story is lightning quick and the highly detailed characterisation of Robinson’s tale is powered by the magnificent artwork of his creative partners. And with both working in near perfect synchronicity, which they do in both volumes, Robinson and company have ensured that Squadron Supreme should be at the top of everyone’s pull list. It’s on mine…  Tim Cundle