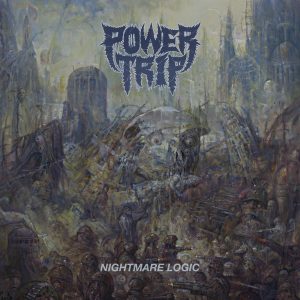 There was a time, back in the mists of history (otherwise known as the eighties) when it seemed as though the amalgamation of Thrash and Hardcore, known as Crossover, was going to conquer all before it and reign supreme over global extreme music scene. Alas, it wasn’t too be as music became more and more intense and the art of thrashing became a niche pastime and Hardcore and Metal amicably parted ways and decided to travel their own paths on the journey to ever increasing degrees of extremity. Then about fifteen years ago, something unexpected happened. The paths of both scenes collided again, and a minority of bands rediscovered the lost art of playing fast and thrashing hard, and from that moment on the Crossover scene slowly began to, once more, gain momentum. Today, that scene is led by small vanguard of bands who have mastered the multiple disciplines of speed, energy and precision, combined them with mosh power and fuelled them with raw, slamming fury. And it gave the world Power Trip.

With their sophomore album, Nightmare Logic, an amped up maelstrom of thrashing insanity forged by demi-gods cloned from the DNA of the Cro-Mags, Slayer, DBC and Fratricide who were raised solely on a musical diet of Nuclear Assault and Beyond Possession, Power Trip have delivered a devastating weapon of thrash destruction that will propel them toward the upper echelons of the Crossover stratosphere. Previously content to run with the rest of the Crossover pack, Power Trip armed by, and with, Nightmare Logic, have staked their claim to the scene’s throne, and it is a challenge that few, if any, will be able to meet. So bow down, pledge your allegiance, pull on your best stage diving boots and your oldest, rarest band shirt and get ready for the circle pit. All hail Power Trip, the new Emperors of the Crossover-verse. Let the thrashing commence…  Tim Cundle