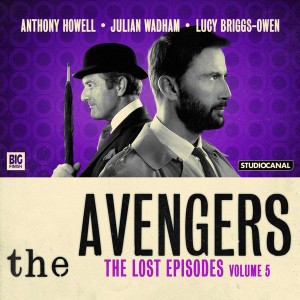 Adjust your button hole, fix your tie, brush off your best bowler and don’t forget your brolly, because we’re off to the stiff upper lip sixties in the company of Dr David Keel and John Steed as they protect merry old England from all manner of criminals, spies, ruffians and ne’er do wells. That’s right boys and girls, it’s time for another brace of high action adventures with The Avengers, so get ready and get set, it’s go time.

As with the other volumes, we’re treated to four different stories, Nightmare, Girl on the Trapeze, Crescent Moon and Diamond Cut Diamond and there isn’t a duffer in sight. Each, while offering a wildly different premise, delivers the requisite combination of interesting, well-written plot, thrills, double-dealing, fisticuffs and the type of no-nonsense, square jawed heroics and heinous villainy that we’ve come to expect from The Avengers. Whether Keel and Steed are racing to prevent the theft of cutting edge pharmaceutical technology, investigating murder and cold war espionage in the circus, tracking kidnappers and political insurgents on a Caribbean island “paradise” or going undercover to try and break up a smuggling ring, they’re always ready, willing and able to put themselves in harm’s way for Queen and country.  Be warned though, after listening to this latest collection, you’ll probably need to sit down for an hour so, to calm down and regain your composure before having to return to boring old normality.

Julian Wadham and Anthony Howell have forged an incredible chemistry as Keel and Steed and have well and truly made the roles their own, adding a sense of dynamism to both their characters and the stories.  And talking of stories, if you’re not already, please be aware that they are of their time and that the adaptations have rigidly (and rightly so) maintained that sense of period. So, if you’re not familiar with sixties style drama and the wonderful peculiarities of its pace and tone, then both may come as a bit of a shock. It was a vastly different world, one locked in the middle of a Cold War, one whose ideals and ideas were at odds with those of the modern world, and The Avengers exemplifies all of these things as the sixties are the core constituent of its DNA. However, if like me, you are fan of the series’, stories and tales that emerged from that time, then you’ll enjoy every second of the twisting and turning tales that plunge our intrepid heroes into danger at every opportunity.  Now then, let’s talk about Volume Six… Tim Mass Movement