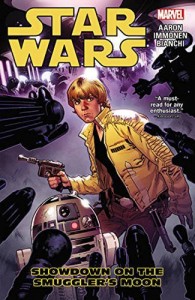 Adventure, excitement, spectacle, stories that are full of drama and wonder, characters that change your perception of the “goodies and baddies” dynamic (while still adhering to all of its rules), and surprises and shocks galore are the core elements that lie at the heart of any good ‘Star Wars’ tale. Fans of the franchise expect, want and need to be transported to that far away galaxy, taken back to that time long ago and to share in the exploits of its heroes and villains. And Jason Aaron, in his ongoing run on Star Wars delivers everything that’s required of him and much, much more.

When last we left our motley band of rebels, Han and Leia were being pursued by the Empire and had fallen into the hands of “Mrs. Solo”; while Luke, following an altercation with Boba Fett, stumbled across Ben Kenobi’s journal. Showdown on the Smuggler’s Moon begins with the diary of the old Jedi and in a story told via flashback, recounts the first time that Ben saved his soon to be apprentice’s life, rediscovered his sense of purpose and duty and, unbeknownst to them, came to the aid of the moisture farmers of Tatooine. Expertly illustrated by Simone Bianchi, it’s a heart-warming interlude that serves as a reminder of the pivotal role played by Obi Wan in Luke’s destiny, even when he wasn’t aware he was doing so. Following that brief, but entertaining intermission, Aaron plunges us back into the thick of things in a fierce, frantic and adrenaline soaked story in which Luke searching for any and all information about the Jedi finds himself fighting for his life in the Hutt owned, blood soaked stadium on the Smuggler’s Moon, Nar Shaddaa. It isn’t long before his friends, chased by Vader’s forces and bounty hunters, come to his aid in this engrossing, captivating story of betrayal, double cross and treachery that twists and turns its way through a rapid-fire, ingenious plot filled with snappy dialogue and authentic, faithful characterisation. Stuart Immonen’s sumptuous art is suffused with remarkable detail and beauty and would cause even Ralph McQuarrie’s jaw to hit the floor in disbelief and wonder, and coupled with Aaron’s incredibly inventive story-telling ensures that Showdown , and the continuing Star Wars title, is everything that you’d expect, want and need from the book that bears its name.  Tim Mass Movement