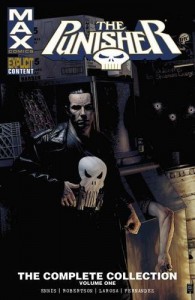 War is the crucible in which men are either forged or broken.  It is the beast that smashes the souls of its participants into a million tiny fragments and the lover in whose embrace the lost find sanctuary, and it’s the only thing that Frank Castle has ever found any comfort in, or been any good at. The Punisher has always been Marvel’s avatar of destruction, the anti-hero able, and more than willing, to do what other “heroes” can’t and won’t, and a character who, in our increasingly broken and fractured society, as horrible as it sounds, is gradually becoming easier to identify with and understand.  Avenging the senseless loss of his family during a mob hit, he wages his one man war against crime and its perpetrators, using any and all means at his disposal in order to fulfil his mission. His refusal to remain powerless and accept his destiny and the hand that fate has dealt him lie at the heart of his appeal, as each and every single one of us, has at one time or another, longed to have the courage and sense of purpose that’s needed to change our own fortunes for the better. However, the vast majority of us wouldn’t dream of using Frank’s methods to achieve whatever it is we most desire, but that idea of being able to alter things for the better, that’s what draws us to him. That and the guns, violence and bone snapping, gore drenched, blood soaked mayhem. Because hey, who doesn’t love a good vigilante story?

The Punisher: The Complete Collection is set to compile Garth Ennis’ incredibly successful run on the Max title and Volume One pulls together the first sixteen issues in an immensely satisfying and highly enjoyable book. Garth Ennis, more so than any other writer, understands, and gets Castle, he understands that he’s a soldier who, having been stripped of his family, has only war. He has nothing else, and over the course of three different story arcs, Born, In the Beginning and Kitchen Irish, Ennis establishes the man, the myth and the legend that is The Punisher. From the battlefields and hopeless desolation of Vietnam, to the tangled web that the CIA weave in an attempt to “recruit” The Punisher for their covert assassination program, to bringing an end to the ongoing gang wars that have plagued the streets of Hell’s Kitchen (or Clinton as it’s now known), Volume One captures Castle in all his furious, and at times surprisingly human, glory as in an unceasing hail of bullets, knives, bombs, fists and anything else that can be used as a weapon, punishment is visited upon the wicked and the lawless. The artwork of Robertson, LaRosa and Fernadez is dark, foreboding and detailed, capturing the full horror of Franks’ vocation and leaves nothing to the imagination. Ennis’s stories are full of vivid, fully realised characters and the dialogue is often shocking, filled with profanity and stark realism, and are, from beginning to end, enticing, engaging and completely mesmerising. Brutal, vicious, wonderfully well written and illustrated, this isn’t for the faint hearted, but we wouldn’t, and couldn’t, have it any other way.  Here is justice, here is punishment… Tim Mass Movement