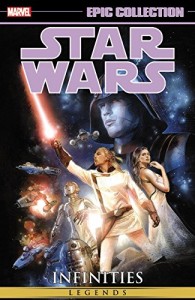 If you’re at all familiar with Marvel’s What If?  titles then you’ll know exactly what Infinities is all about. You know the series I mean. The one in which a single aspect of an event, or a hero’s or villain’s life is changed and then the ramifications of that, often, insignificant act and the changes to the timeline, world and lives of the characters are explored.  Here, in these pages, you’ll discover how Luke missing the crucial shot that destroyed the Death Star altered the course of history and transformed a trilogy into a single, self-contained story. How one death on Hoth altered the destiny of the last Jedi and the Empire, and how Leia and her friend’s failure to secure Han Solo’s freedom resulted in an apprentice turning on his master and shifted the balance of galactic power in a divergent direction.  And if that wasn’t enough, The Star Wars, the series based on George Lucas’s original, very different initial script, is also included, because, you know, you can never have enough of a good thing.  Prepare to enter the looking glass, because in Infinities, things get weird. Really, really, weird. But in a good way. For the most part.

Okay, so I was never going to be able really get onside with an alternate version of The Empire Strikes Back, because I’ve always thought that, out of all the films in the franchise that’s the one that comes closest to perfection. While Dave Land’s tale is interesting and inventive, if a little predictable in places, and Davide Fabbri’s pencils are razor sharp throughout, the end result is a little too sentimental; and without the original’s downbeat finale, it just becomes another story in the franchises’ mythology. However, condensing Star Wars into a single story, that really does work, and the tangent that Chris Warner employs to spin the story off onto a completely, but at the same time extraordinarily familiar, disparate path combines suspense, thrills and excitement in equal measure and springs off the page thanks to Drew Johnson’s artwork. And then there’s Jedi, which in all fairness is actually rather enjoyable as not only does it forgo the whole ‘let’s-merchandise-the-heck-out-of-some-cuddly-toys’ Ewok sub-plot, but it’s a much grittier, harder and slightly darker tale that powered by the, at times, noir influenced illustrations of Ryan Benjamin, utilises loss and redemption as its central themes with writer Adam Gallardo forsaking the easy road to victory in order to craft a far more satisfying story.  Which just leaves us with Rinzler and Mayhew’s The Star Wars, an adventure that bears little in common with its far more famous “cousin”, but is nonetheless a strangely captivating, beautiful looking space opera that’s heavily influenced by Frank Herbert’s Dune, the Flash Gordon chapter-plays of the thirties and the pulpiest of pulp magazines from the Golden Age of Science Fiction. You know what though? Its vision of what might have been is worth the price of admission alone. Welcome to Infinities… Tim Mass Movement