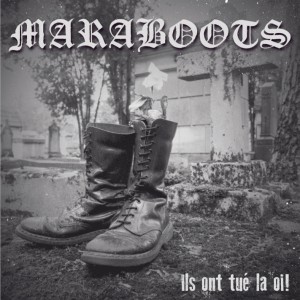 Maraboots – Ils Ont Tue La Oi! 7″ (Une Vie Pour Rien)
Paris bootboys Maraboots have been causing quite a stir over the past few years for one reason or another, mainly for playing their role in really putting Paris Oi! back on the map with their take on the classic French sound . Hard hitting oi! with a saxophone that is more prominent on this release than on previous records. Although that earns them comparisons with Stomper 98, for me the sound and melodies that they create make this much closer to the early French sound of Camera Silens and of course vocals sung in French make that likeness much more apparent. However this is lively and anthemic and relevant today rather than simply being a throwback to bygone times. The songs on here are by far Maraboots’ strongest material – each of the three songs has great melodies, powerful chorus lines and the haunting saxophone makes the band stand out from the masses. Sadly this is a posthumous release as Maraboots have just played their last ever show, but with members of band now flying the flag in Lion’s Law, the spirit of this excellent band lives on. Tom Chapman